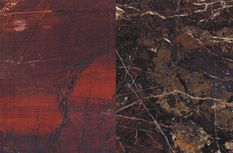 Umber and manganese ore in the Northern Shimanto Belt from Wakayama Prefecture.

The Geological Survey of Japan, AIST is publishing gravity map series of Japan on a scale of 1:200,000. We published a new gravity map of Kagoshima district using existing 15,641 gravity points and new 236 gravity points surveyed around Amakusa Island in 2001. We estimated surficial rock density distribution using the gravity data by the ABIC minimization method. The estimated densities show geologic structures buried in pyroclastic flows and density changes can be observed in same geologic units. The Bouguer anomaly map corrected by the density distribution shows clear relations between gravity anomalies and geologic features such as the Usuki-Yatsushiro tectonic line, Kagoshima graben and calderas in the survey area.

Fission-track ages of the "Green Tuff" in the subsurface of Niigata Prefecture, central Japan.

Fission-track age determinations using both internal and external surfaces of zircons for 23 core samples of the "Green Tuff" were carried out. These samples were collected from 21 wells drilled for the petroleum exploration in Niigata Prefecture.
After the detail examinations for grain ages of each sample using histograms and age spectra, fission-track ages are interpretated. Fission-track ages of the "Green Tuff" are divided into two age groups (15.5 to 17.1 Ma and 13.5 to 13.8 Ma). The older group is recognized in all three districts (Kita-kambara, Mitsuke and Yoshii districts) and corresponds to the Tsugawa stage or the lowest part of the Nanatani stage. The younger group, corresponding to the uppermost part of the Nanatani stage, is relatively restricted.
Grain ages show the presence of zircons derived from basements in the Kita-kambara and Yoshii districts. No basement zircons and younger fission-track ages of some wells such as Sanjyo SK-1 indicate that volcanism was active for a long period in the Mitsuke district.
An analysis of grain ages in the Mitsuke oil field using Brandon (2002) show felsic volcanism was active around 23 Ma, same as the Sado Island and Asahi Mountains.
Reset of fission-track ages of both surfaces and distribution of grain ages give us some information on past thermal conditions. For example, the thermal alteration in the Yoshii district occurred around Yoshii SK-10D and started just after the eruption of rhyolite can be inferred.

To evaluate resource potential of rare earth elements (REE), umber (ferromanganese sediment), manganese ore and associated rocks such as basalt, chert and shale in the Itogo, Misoigawa, Usugaokayama, Komoridani and Ryujin areas in the Northern Shimanto Belt, SW Japan were examined. The umber in the Itogo area and manganese ore in the Ryujin area occur between a basaltic footwall and a hanging wall shale.
The basalts from the five areas are altered, resulting in addition of water and alkaline elements. Chondrite-normalized REE patterns of the basalts have slightly LREE-depleted and flat-shaped patterns. The REE patterns and trace element compositions of the basalt indicate that they are Mid- Oceanic Ridge Basalt in origin. Chemical compositions of umber are characterized by enrichments in REE and negative Ce anomalies relative to post-Archean average shale (PAAS). Manganese ores are depleted in REE and show positive Eu anomalies. Geochemical features and geological evidences suggest that both the umber and the manganese ores were formed by precipitation of iron and manganese from submarine hydrothermal solution near the Mid-Oceanic Ridge.
The umber contains up to 1,441 ppm of total REE contents, while the manganese ores have less than 100 ppm in total REE. These umber are equivalent in HREE contents compared with those of the "ion-adsorption" deposits (weathered granite) in southern China, which is the present major HREE producer. Although the total amount of REE resources in the Itogo area is quite small, basalt-chert and basalt-shale successions are common in accretionary complexes of Japan, and REE potential of ferromanganese deposits deserve to be inverstigated.