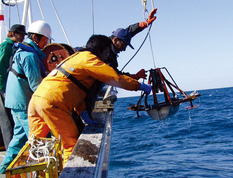 A small ship of about 5 tons was used for sediment sampling and taking sea-bottom photographs in the survey of the flood influence off Hidaka. This picture shows recovery of a Smith-Mcintyre grab sampler. The operation on such a small ship will be difficult when the wave become a little higher.

Tephrostratigraphy and diatom biostratigraphy of the Miocene Nomura Formation in the Tsugawa area, Niigata, Japan.

The middle to upper Miocene tephrostratigraphy was established for the tephra beds intercalated in the Nomura Formation exposed along the Shinazawagawa River in the Tsugawa area, Niigata Prefecture, Japan. Field occurrence, petrographical characteristics (grain-size distribution, mineral composition, heavy mineral composition and shape of volcanic glass shards) and chemical composition of volcanic glass shards were systematically described for the 80 tephra beds. Furthermore, precise numerical age was calculated for each tephra bed on the basis of detailed diatom biochronology of the Nomura Formation. From 12 Ma to 7.5 Ma four stages was discriminated based on the frequency of tephra beds. A tendency of upward decrease of K2O content was recognized in the glass shards in the Nomura Formation.

Distribution of surface sediments after the 2003 flood on the shelf off Hidaka, southern Hokkaido.

We carried out a marine geological survey on the shelf off Hidaka, southern Hokkaido in 2005 and 2006, and 2 and 3 years after the severe flood in August, 2003. Bottom water turbidity based on sea-bottom photographs generally decreases offshore. It is higher in front of each river mouth than the surrounding area on the inner to middle shelf, showing the influence of suspended materials by the river discharge. Surface sediments on the inner shelf near the Saru River mainly consist of coarse sand to gravel. Medium sand is distributed in the shallow depression in front of the Saru River, which is thought to be the old river path during the lowstand of the last glacial age. Mud covers sandy sediments at a few sites in the depression. Muddy fine sand is widely distributed on the outer shelf. Very fine sand to mud, which is finer than the surrounding area, is distributed on the offshore area of the depression despite the absence of a topographic depression. Away from the Atsubetsu River, a small distribution of mud is recognized in the depression on the inner shelf. Finer sediments are distributed on the offshore area of the depression compared with the surrounding area on the outer shelf, which is the same as the area off the Saru River. On the other hand, on the shelf close to the Niikappu and Shizunai Rivers where there is no topographic depression, very fine to fine sand is widely distributed, and muddy sediments are distributed on the inner to middle shelf among sandy sediments. It is presumed that shelf topography in front of the rivers controls the transportation and preservation of flood sediments.