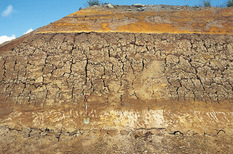 The eolian deposits consist mainly of brown-colored massive sandy mud containing abundant weathered volcanic materials. The orange-colored layer in the upper part is the Hiuchigatake- Nanairi tephra at 0.16-0.17 Ma. The white-colored layer in the lower part is the Iiji-Takatsue tephra at 0.25-0.28 Ma, marking a climate terrace in Marine Isotopic Stage 8.

In order to evaluate the background abundance and anthropogenic contamination of chemical constituents, a total of 810 samples such as soils and stream sediments from the Kanto district, and marine sediments from the Tokyo Bay were analyzed for major and minor constituents. The background abundance of constituents are controlled mainly by the mode of occurrence, distribution of grain size, concentration and diffusion during the process of weathering and diagenesis, and biogenic enrichment. The effect of recent anthropogenic contamination in the studied natural forest soils is estimated to be negligible. However, significant amounts of P2O5, Cd and U which derived mainly from the phosphatic feltilizer are detected in the cultivated and paddy field soils. High concentrations over background abundance are found for As, Cu, Hg, Pb, Sb, Sn and Zn in the soils from parks and residential lands indicating the contamination by the anthropogenic source constituents. The stream sediments obtained around the old mineral deposits such as Ashio, Takatori and Hitachi are much dominant in several constituents. The high concentrations of Cr and Ni in the sediments from the Kanto Mountain are caused by clastic materials derived from the basement ultramafic rocks. The sediments collected around the urban industrial areas are generally abundant significantly in some elements of anthropogenic source constituents such as Zn, Sn, Pb, As, P2O5, Hg, Cd, Bi, Cu and/or Sb. The upper layer sediments in the middle to northern region of the Tokyo Bay are mostly dominant in Pb, Zn, Sn, Cd, Bi, Sb and Cr by the recent environmental contamination, whereas the sediments in the southern region have lower background abundances. The average background abundances of Al2O3,TiO2 and most heavy metals are clearly higher in the soils than the Tokyo Bay sediments, with the stream sediments showing intermediate abundance. The different concentrations of chemical constituents among the studied soils, stream sediments and Tokyo Bay sediments may be formed mainly during the process of weathering and diagenesis of parent materials.

Major and trace element concentrations of garnets were obtained to evaluate the homogeneity in the samples for possible micro-beam standard materials. In this study, we investigated five natural garnets, which is four gem garnets (GA1, GA2, GA3 and GA4) and one optically homogeneous garnet (GA5) in the skarn from Adirondack, USA. EPMA was used to obtain major element data to examine in detail the chemical homogeneity of the samples. Two garnets (GA4 and GA5) show compositional heterogeneity and are not suitable as the standard. Concentrations of 39 trace elements of garnets were obtained by LA-ICP-MS analysis. Evaluation of the REE and other trace element data indicates only one gem garnet (GA1) with a grossular composition has the potential for being a standard mineral.

The eruption history of the Kuchinoshima volcano was reconstructed from the stratigraphical relationship of the volcanic units and tephra. The Kuchinoshima volcano is an andesitic composite volcano on the volcanic front of Ryukyu arc, SW Japan. Kuchinoshima consists of at least 10 hornblende andesitic lava domes on pyroxene andesitic volcanoes older than 0.3 Ma. A series of pumice flow deposits named the Ogachi pyroclastic flow deposit, erupted around 40 ka from the Ueura volcano, which is a composite volcano with some lava domes. After the formation of the Ogochi caldera, at least three lava domes named Yokodake, Minami-Yokodake, Kita-Yokodake were formed. Some pyroclastic flow deposits are associated with the formation of these lava domes, and the pyroclastic flow deposit of Minami-Yokodake was aged ca. 19,000 BP. Iwayaguchi debris avalanche flow deposit was formed around 7.9 ka by a large sector collapse of the Yokodake, Minami-Yokodake and Kita- Yokodake domes. Maedake lava dome was built inside the sector collapse scarp. The Otoshinodaira and Moetake volcanoes and other minor lava domes were formed after the formation of Maedake. The volume of each lava dome is evaluated as less than 0.3 km3. The effusion rate of the Kuchinoshima volcano in the last ca 40,000 years is evaluated as 8.5~104 m3/yr, and this value is much smaller than the average production rate of a typical volcano on the volcanic front of the NE Japan arc and Ryukyu arc. The Moetake volcano is the youngest lava dome on Kuchinoshima Island. Some explosion craters on the Moetake lava dome indicate that the phreatic explosions were repeated from the Moetake volcano. The last eruption was possibly younger than the 18th century.

Iiji volcano in the Niigata Prefecture, NE Japan, is a composite one 60 km behind the Quaternary volcanic front. This volcano had been active between 0.3 and 0.2 Ma. The products of this volcano are dacitic to andesitic and 8 km3 in total volumes. This study reveals new evidence of an explosive eruption of this volcano that generated remarkable tephra during the Marine Isotope Stage (MIS) 7 in the northern part of the Kanto region. The Echigo-Yuzawa pyroclastic flow deposit is newly defined in this volcano; this deposit was previously regarded as non-volcanic conglomerate and sandstone beneath the volcano. However, such conglomeratic unit is lag breccia containing abundant lithic fragments with a pyroclastic matrix. The essential material of this deposit is cummingtonitebearing orthopyroxene hornblende quartz dacite, and its fission-track age for zircon is determined as 0.21 ± 0.07 Ma. The Moka pumice fall deposit in the northern Kanto plain has same compositions and refractive index modes of glass shards and crystals with the Echigo-Yuzawa pyroclastic flow deposit. Also, the tephrostratigraphic position of the Moka fallout is consistent with the radiometric age. So, this is renamed as the Iiji-Moka tephra (Ij-MO); its volume is measured as at least 1.4 DRE km3 . Other previous study revealed that the middle part of the Miwa Formation (MM) in the coastal region of the Ibaraki Prefecture intercalated the Moka pumice. Although MM was interpreted as the lowstand deposit during MIS 6, observed lithofacies show that MM is made up of tidal channel and fluvial deposits filling the paleo-Naka River at the high-stand system tract. Modal compositional analyses indicate that the volcaniclastic deposit in MM, which was formally correlated with the Moka pumice, is a resedimented mixture consisting of Ij-MO, Kinunuma-Kurodahara (Kn-KD) and other tephra materials. This evidence suggests that the eruption of Ij-MO and Kn-KD took place immediately before the deposition of MM. Previous K-Ar ages from the volcanic products of Iiji volcano above the Echigo-Yuzawa pyroclastic flow deposit have been determined as about 0.22 Ma, and previous fission-track ages from Kn-KD below Ij-MO have been dated from 0.24 to 0.20 Ma. Therefore, the eruption ages of Ij-MO and Kn-KD are close to 0.22 - 0.23 Ma and 0.23 - 0.24 Ma, respectively. Also, these ages indicate that MM is the high-stand deposit at MIS 7.3 to 7.1.