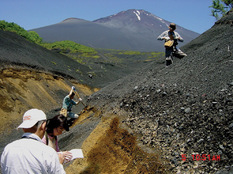 The tephra layers from Younger Fuji Volcano outcrop continuously at Tarobo near the parking area of Gotenbaguchi 5th station of Mt. Fuji. At this point, the uppermost tephra layer is an air fall deposit from 1707 Hoei eruption. The lowermost part of Hoei tephra is composed of pumice layer. We collected the weathered volcanic ash between scoria falls. Volcanic glasses originating from AD 838 Kozu- Tenjosan tephra were detected below Hoei tephra (Kobayashi et al. in this volume). We can see the crater of Hoei eruption, and a peak called Hoeizan on the southeastern flank of Fuji volcano (back).

Eruptive history of flank eruptions by the a trench survey on scoria cones on the southern flank of Fuji Volcano, Japan.

The eruptive history on the southern flank of Fuji Volcano, Japan, was studied, mainly using a trench survey at the scoria cone’s summit. The trench survey is useful to obtain the stratigraphy of flank eruption products and samples for 14C carbon dating. The fall horizons of Kawagodaira pumice (Kg) and Kikai-Akahoya tephra (K-Ah) were determined by the content of glass particle and refractor index of glass. Several tephras were newly defined as follows in descending order: A, B, C, D, E, F3, F2, F1, and G. A to D are between Yubune-2 scoria and Zunasawa scoria. E, F3, F2, F1 and G are below the Kawagodaira pumice. F3 and F2 have become good key tephras on the southern flank of Fuji Volcano to correlate scoria beds to each other. They are different from R-II and R-I scorias because their ages and distributions are different from those of R-II and R-I. G is a surge deposit. Finally, we classified the stage of flank eruptions using the results of this survey. Suyamatainai lava flow, Minami-Garanzuka, Obuchi scoria and Kotengu lava flow erupted after Yubune-2 scoria. Minami- Garanzuka is the eruption site of the Mizugatsuka-Hinokimarubi lava flow. The eruption site of Obuchi scoria was determined to be in the vicinity of Kita-Takahachiyama with two craters. Flank eruptions between Yubune-2 scoria and S-10 scoria are Asakizuka and Takayama. Koshirikizuka, just below Zunasawa scoria at the trench site, may be correlated to Nihon land lava flow just below S-10 because of their petrographic resemblance. The flank eruption between S-10 and F3 is Shirotsuka. Flank eruptions between F2 and K-Ah tephra are Higashi-Usuzuka and Hiratsuka. Flank eruptions are slightly older than the K-Ah eruptions, Hinokizuka and Nishi-Usuzuka. Flank eruptions older than the K-Ah eruption are Kita-Takahachiyama, Takahachiyama, Hokuto-Takahachiyama, Kurotsuka, and Azamitsuka.

Eruption ages and whole-rock chemistries of scoria cones on the northern to western slope of Fuji Volcano based on trenching surveys.

Eighteen unknown-aged scoria cones on the northern to western slope of Fuji Volcano were trenched to determine their stratigraphic positions. We recognized three key tephra layers derived from large-scale eruptions of Fuji Volcano from 1,400 B.C. to 300 B.C. and detected two widespread tephras of the Kikai-Akahoya at 5,300 B.C. and Amagi-Kawagodaira at 1,400 B.C. within volcanic ash soil layers. Based on the detected levels of the widespread tephras and thickness of volcanic ash soil layers, the eruption ages of the scoria cones could be estimated as follows. 1) Three (Nagayama, Futatsuyama, and Sawarayama) cones formed from 8,300 B.C. to 6,000 B.C. 2) Five (Yumiizuka, Nishiken, Hokusei-okuniwa, Maruyama, and Toyazuka) cones were constructed from 5,300 B.C. to 2,600 B.C. 3) Five (Hachiken’yama, Nishi-kosukemaru, Kosukemaru, Tomine, Usuyama, and Hokuseiusuyama) cones formed from 2,300 B.C. to 1,800 B.C. 4) Four (Hokusei-yumiizuka, Higashiken, Shikanokashira, and Katabutayama) cones were erupted from 1,600 B.C. to 1,300 B.C. The petrographic features and chemical compositions of the products from the scoria cones conform with those from contemporaneous lava flows. During the last 10,000 years, the K2O content and FeO*/MgO ratio of the products from the northern to western flank eruptions decreased during 2,300 B.C. to 1,800 B.C.

Reexamination of the eruptive history of scoria cones on the northwestern foot of Fuji Volcano, Japan.

Stratigraphic relations for seven scoria cones on the northwestern foot of Fuji Volcano were re-examined based trenching surveys and outcrop observations. The Yumiizuka scoria cone was formed after the Kikai-Akahoya tephra at 5,300 BC. The Tsugaoyama scoria cone’s eruption age could not be determined due to the accumulated thickness of the Omuro scoria at 1,300 BC. The Shikanokashira and Hokusei-yumiizuka scoria cones were erupted just before the Omuro scoria. Based on the thickness, degree of vesicle, and color of the essential deposits at the Katabutayama scoria cone, Omuro scoria could be derived from not only the Omuroyama but also Katabutayama scoria cones. The detected horizon of the Kozushima-Tenjosan tephra at A.D. 838 and 14C ages suggest that the Tenjin’yama-Igatonoyama and Koriike-Hakudairyuo scoria cones were constructed during A.D. 838-864, and A.D. 410-770, respectively.

Eruptive history of Fuji Volcano from AD 700 to AD 1,000 using stratigraphic correlation of the Kozushima-Tenjosan Tephra.