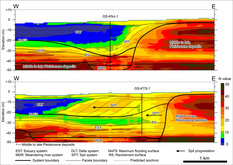 Distribution of N-vales across the eastern margin of Tokyo Lowland

These figures visualize a distribution of Holocene spit in the eastern margin of Tokyo Lowland. Sedimentary facies of two sediment cores (GS-KNJ-1 and GS-KTS-1) obtained from Katsushika-ku, Tokyo Metropolitan and a sigmoidal distribution of N-values higher than 10 suggest that the spit evolved in the bay-mouth of Paleo-Okutokyo Bay under the influence of residual currents. An arrow on the west of GS-KTS-1 indicates the spit progradation since after the middle Holocene. These figures are stacked images of horizontal distributions of N-values at every 1 m depth. N-values were abstracted from existing borehole logs. The horizontal distributions of N-values were illustrated by applying inverse distance weighted (IDW) interpolation. See Tanabe et al. (2006) of this issue and Eto et al. (2006) for more details.

Sedimentary facies and physical properties of the Chuseki-so under Katsushika-ku, eastern margin of the Tokyo Lowland, central Japan: Time and spatial distribution of Holocene spit sediments.

Latest Pleistocene to Holocene incised-valley fills (the Chuseki-so) under the eastern margin of the Tokyo Lowland comprise sandy sediments which stiff 20–50 in N-value in T.P. -40–0m. The sandy sediments have been interpreted as Pleistocene shallow marine deposits or as transgressive deltaic sediments deposited during the last deglaciation. However its distribution and depositional processes have not been well documented. On the basis of sedimentary facies analysis and radiocarbon dating of two core sediments obtained from the eastern margin of the Tokyo Lowland, we have clarified that the sandy sediments can be interpreted as Holocene spit sediments which wide 5 km and elongate northwest-ward from the Shimosa Upland. The proximal and distal portions of the spit sediments, respectively, consist of shelly sand and sand-mud alternation. Large amount of the spit sediments deposited in the bay-mouth portion of the Paleo-Okutokyo Bay during the middle-Holocene sea-level highstand. Compared with a massive prodeltaic mud in the Tokyo and Nakagawa Lowlands, the spit sediments are relatively coarse and high-density. It is therefore predicted that the distribution of the spit sediments will be important to make earthquake simulation/city planning.

Latest Pleistocene to Holocene incised-valley fills (the Chuseki-so) under the lower reach of the Arakawa River comprise relatively thick fluvial-sand compared with those under the Nakagawa and Paleo-Tokyo Rivers. On the basis of sedimentary facies analysis, radiocarbon dating and measurement on physical properties of core sediments (GS-AMG-1) obtained from Motogi district, Adachiku, Tokyo Metropolitan, it has been revealed that the Chuseki-so in the core sediments (>T.P.-55.7 m) consists of (1) Gravel (braided-river channel fills), (2) Sand and peaty silt (meandering-river floodplain sediments), (3) Sand (tidal-current influenced channel fills), (4) Sand-mud alternation containing shells (tide-influenced deepening-upward shallow-marine sediments), (5) Silt to sandy silt containing shells (prodelta to deltafront sediments), (6) Sand-mud alternation containing burrows (tidalflat sediments), (7) Peaty silt (modern meandering-river floodplain sediments) and artificial soils, in ascending order. Upward-deepening facies succession of (2) to (4) (12,940±100–8,030±110 cal BP) and upward-shallowing facies succession of (5) to (7) (6,660±180–2,245±95 cal BP), respectively, deposited in the core site in relation to sea-level rise since after the Last Glacial Maximum and sealevel stillstand/gentle lowering during the middle to late Holocene. Previously reported thick fluvialsand is correlative to (3) in Motogi district. Density, water content, and N-value of the Chuseki-so in GS-AMG-1 are correlative to those of the sand-mud contents.

Microtremor array measurements (MAM) have been applied to delineate buried incisedchannels in urban area of Japan. The site is a rectangular of 6 km ×4 km in the Nakagawa Lowland placed at Soka and Misato cities in Saitama prefecture, Japan. One-hundred and four MAM have been carried out to delineate buried incised-channels filled with unconsolidated alluvial deposits (Chusekiso) thicken about 50 m. Triangle arrays were used at wide area, such as parks. L shaped arrays using roads and crossings were also used for the data acquisition at the most of the site. A spatial auto correlation (SPAC) method was applied to the approximately 10 minutes vertical component of microtremor data. Phase-velocity curves were calculated in the frequency range of between 2 and 10 Hz. In spite of cultural noise or irregular array shape, fundamental mode of phase-velocity curves are clearly obtained in the all observed points. An one-dimensional inversion using a non-linear least square method has been applied to the phase-velocity curves to obtain one-dimensional S-wave velocity structures. These one-dimensional structures were interpolated into a three-dimensional structure. We succeeded to map the shape and the depths of buried channel that agree with the borehole data very well. The reconstructed shape and the depths of buried incised-channel fit well with those interpreted from borehole data.