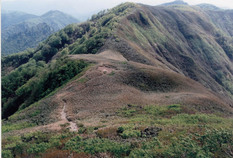 Many ridge-top gentle slopes occur in the Ryohaku Mountains, central Honshu. This photograph shows one of these gentle slopes "Kanmuridaira", just east of the Mt. Kanmuriyama, 1,256 m height. On this gentle slope shallow depression and up slope-facing scarp can be recognized. These gentle slopes are thought to be made up of debris which fills up depressions formed by rock gliding of basement sedimentary rocks, mainly Jurassic accretinary complex. However, the detail of the process and age of their formation are still remained unsolved.

A 2,035.4 m-deep drilling was carried out at the Yamakita-minami site in the Ashigara Plain, by Special Project for Earthquake Disaster Mitigation in Urban Areas. In the Ashigara area, Philippine Sea plate is subducting beneath and is partly colliding with North American plate. The two plates are bordered by Kozu - Matsuda fault, Kannawa fault, Nakatsugawa fault system, Shiozawa fault system, and Hinata fault which are arranged upside-down V shape configuration. The drilling site locates at the northern tip of Philippine Sea plate and on volcanic fan deposits from Hakone volcano.
We examined all-core drill-hole samples recovered from depth 0 m-1,076.6 m. Our 55 wholerock major-element analysis and microscopic observation revealed that the core consists of 4 stratigraphic groups; lowest Group I (depth greater than 721.3 m) which is equivalent to Ashigara Group, and Group II - IV (depth from 13 to 721.3 m), equivalent to products in Hakone Old somma stage. The uppermost depth of basement underlying Hakone volcano is 570 m below sea level. Based on lithofacies and petrographic observation, however, we could not find presence of faults nor confirm duplicated stratigraphic units in bore-hole core.
Previous analysis dealing with borehole data confirms that the basement altitude in the central part of Hakone volcano is high N-S trending ridge as 500 m above sea level, and those beneath east and west flanks of the volcano subside to 370 to 700 m below sea level. These displacements may support the northern extension existence of intraplate faults tearing colliding and accreting part from subducting part of Philippine Sea plate.

Lithostratigraphy of the UT05 core bored through the Hoshakuji terrace in Utsunomiya City, NE Japan, and erosion-deposition history of the Kinu River since Middle Pleistocene.

Fluvial terraces have been typically developed in the Utsunomiya region at the northern Kanto plain, NE Japan, since Middle Pleistocene. There are the Kamikake, Hoshakuji, Kanuma, Shirasawa, Takaragi and Tawara terraces, in ascending order. In this study, the lithostratigraphy of the UT05 core and the tephrostratigraphic abandonment ages of the terraces are described to reveal erosion and deposition history of the Kinu River. The UT05 core has been bored 40 m in depth through the Hoshakuji terrace. The UT05 core consists of eolian veneer deposits from 0 to 15.40 m in depth, the Hoshakuji fluvial terrace deposit from 15.40 to 18.88 m and the Early Pleistocene Sakaibayashi Formation from 18.88 to 40.00 m. The eolian veneer deposits are made up mainly of brown-colored massive volcanic soil and are interbedded with many pyroclastic fall deposits as follows; the tephra group from Akagi volcano, Daisen-Kurayoshi tephra, Nikko-Mamiana tephra, Iiji-Moka tephra, Kinunuma- Kurodahara tephra and Haruna-Miyazawa tephra. The fluvial terrace deposit is composed of unconsolidated gravels and sand. The top of the fluvial deposit is about 2 m higher than the present alluvial plain along the Kinu River, and the bottom of the fluvial deposit is about 1.5 m lower than one. The Sakaibayashi Formation consists of semi-consolidated conglomerate and sandstone. The tephrostratigraphy of the eolian veneers shows that the abandonment ages of the Kamikake, Hoshakuji, Kanuma, Shirasawa and Takaragi-Tawara terraces are MIS (marine isotope stage) 10, MIS 8, MIS 6, MIS 5.4 and MIS 4 to 2, respectively. Therefore, accumulation of the fluvial sediments has occurred at every glacial tracts forming climatic terraces due to an increase of the sediment load against the stream discharge. All the relative heights between the tops of the fluvial terrace deposits and the present alluvial plain along the Kinu River have been less than 6 m and independent to the abandonment ages of the terraces since 0.35 Ma. This suggests that the formation of the fluvial terraces in this region has been only controlled by the climatic change, and not effected by tectonic movement.

Conjugate active strike-slip faults occur in the Ryohaku Mountains, central Honshu. Right lateral faults occur in the western part of the Ryohaku Mountains where the mainly Jurassic accretionary complex Mino terrane's structure are nearly pallarel to the strike of active faults. I describe geomorphological and geological features of two right lateral active faults, the Kanakusadake fault and the Sasagamine fault. The Kanakusadake fault has systematic right lateral offset of stream channels and ridges, NW-facing scarps on the mountain slopes, its length is 11 km. An outcrop exposes reverse fault which the Mino terrane sandstone is thrust over the late Quaternary talus deposits along its subsidiary fault. Systematic S-shaped bending of stream channels is recognized along the Sasagamine fault. The length of this active fault is only 3 km, but a 9 km-long lineament was found at its northeastern extension. An outcrop shows the high angle fault which dislocates the humic soil dated ca.25,000 yBP. These two faults comprise left-stepping over fault system, and thus a single seismogenic fault which total length is 14 km.