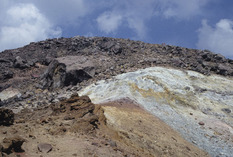 The summit of Nasu-Chausudake volcano, Japan.

Chausudake volcano is the only active volcanic cone of the Nasu volcanic group, about 160 km north of Tokyo. The products of Chausudake volcano are composed of six magmatic eruption units and more than 12 phreatic eruption units. The magmatic eruptions occurred at about 16 ka (Osawa unit), 11 ka (Yumoto unit), 8 ka (Yahata unit), 6 ka (Omaru unit), 2.6 ka (Minenochaya unit), and 1408-1410. The summit of Chausudake is made up of the ejecta of the 1408-1410 eruption that is composed of phreatic fallouts (white part) and an overlying andeaitic lava flow.

Study on characterization of manganese-oxidizing bacteria in the natural environment and estimation of its effect.

Microorganisms were collected from the deposits in a cave and a stream bottom in Japan and their activities for manganese oxidation were studied. The microorganisms were isolated and identified by observation and DNA analysis. Furthermore, a preliminary research for manganeseoxidizing bacteria in core samples of borehole was conducted.
The gram-positive rod bacteria such as Bacillus and Curtobacterium and gram-negative rod bacteria such as Burkholderia were found from the deposits. The manganese-oxidizing bacteria were also found from the bore-hole sediments of more than 20 m depth, which indicates the importance of biological survey for deep geological environments. Besides, the bio-ecological optimum conditions were studied experimentally.
As microorganisms give direct and indirect effects on the chemical environments concerning radionuclide transportation, their biomass, composition, characteristics, optimum conditions and activities are important subjects. They may be different among the microorganisms, so it is necessary to collect their data systematically and make a good database system.

Quaternary volcanoes in the geological map of Japan 1/200,000, Shirakawa, NE Japan: new evidences on the stratigraphy and radiometric ages.

Stratigraphy and structure of the Jurassic accretionary complex in the Daigo district, northern Ibaraki and eastern Tochigi Prefectures, central Japan.

The Daigo district covers nearly 420 km2 in the northern Ibaraki and eastern Tochigi Prefectures, central Japan, about 150 km NNE of Tokyo. The district is topographically distinguished into three areas: in the northeast the Abukuma Mountains, in the central area the dissected lowland and hills, and in the west the Yamizo Mountains. The Abukuma Mountains are separated from the central lowland and hills by the Tanagura tectonic line (TTL). East of the tectonic line, the Abukuma Mountains are mainly underlain by Cretaceous metamorphic and granitic rocks of the Abukuma belt. To the west, accretionary complexes of the Ashio belt ranging from Triassic to probably earliest Cretaceous in age and unconformably overlying Miocene sedimentary and volcanic rocks are respectively exposed in the west and central areas. The mapped area is located in the Yamizo Mountains.
The Yamizo Mountains are mainly underlain by a disrupted and dismembered accretionary complex of various depositional environments ranging from pelagic to terrigenous. The accretionary complex, called the Ashio Terrane, is thought to have been formed along a convergent margin where the Izanagi plate was subducting beneath the ancient Asian continent during the Jurassic period. The Ashio Terrane in this district is tectonostratigraphically subdivided into the Kasama and Takatori Complexes; their lithologic features are almost similar, but the variety and/or abundance of their component rocks, age of deposition and tectonic contact with the complexes can provide the basis for classification.
The Kasama Complex is mainly composed of clastic rocks such as massive to stratified sandstone, laminated mudstone, silty mudstone and pelagic chert. Among these rocks, massive sandstone and laminated mudstone are most dominant, and chert is rarely included in the complex. Pelitic mixed rock, which consists of foliated black mudstone with pebbles or lenticular small blocks of sandstone and chert, is also observed. The Takatori Complex is almost similar to the Kasama Complex in lithology as a whole, however the sequence of laterally extending cherts and overlying clastic rocks of mudstone and sandstone is repeatedly exposed at least three times in this complex. The thickness of each complex is thought to be about 4,000 m.
The Kasama Complex is inferred to be in fault contact with the overlying Takatori Complex. These complexes gently to moderately dip westward. Post-Jurassic folding is represented by the strike obviously swinging from NE-SW to NW-SE. Furthermore numerous subvertical faults, NNW-SSE and NE-SW trending, transect the complexes.