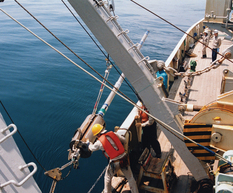 The photo shows how to deploy a corer to collect a sediment core sample from the sea bottom. The corer is kept fixed sideways on the deck, when it is not in use. Before its deployment, the corer should be first shifted laterally toward the sea at the side of the vessel, since it is too long to be put upright on the deck. Then, the corer can be rotated in an upright position above the sea surface. This needs a skilful operation of pulleys and winches. (Locality: offshore of Tokachi, Pacific Ocean; Date: June 2003)

Oxygen isotopic constraints on the geneses of the Late Cenozoic plutonic rocks of the Green Tuff Belt, Northeast Japan.

Sixty-four samples from the late Cenozoic granitoids of the Green Tuff belt were analyzed for the whole-rock δ18O values in northern Honshu and Hokkaido. The granitoids are widely exposed in the southern Fossa Magna region, where low-K magnetite-series of the Tanzawa pulton has the lowest δ18O values, averaged to be 5.4‰. Similar low-K magnetite-series granitoids have low δ18O values of 7.4‰ at Ashigawa type and 6.7‰ at Nii-jima. These low-K series rocks are considered generated from tholeiitic mafic rocks of oxidized type in the lower crust. Normal-K magnetite-series of the Kofu granodiorite has 7.4‰, but the ilmenite-series Tokuwa granodiorite has 9.4‰ and the Mitake granite has 11.2‰. These high values are due to igneous-source magmas mingled with 18Oenriched sedimentary rocks from the basement accretionary complex. The complexity of the δ18O values of the Kofu pluton reflects that of its tectonic setting straddling over the two major arcs. Many 18O-depleted values were obtained from small granitic bodies distributed in the northern Fossa Magna and northward, suggesting meteoric water/ rock intraction that occurred at highest levels of the plutonic bodies in mountainous areas.

Geochemistry of selenium in marine sediments from the eastern part of the Japan Sea.

A total of 215 marine sediments collected from the eastern part of the Japan Sea were analyzed for selenium (Se) by continuous hydride generation and atomic absorption spectrometry. The average Se content of surface samples (0.60±0.45 ppm, n=81) and core samples (1.88±2.19 ppm, n=134) is clearly higher than that of the crustal abundance (0.12 ppm). In the case of surface samples, the Se is generally enriched in the fine sediment fraction than coarse one and positively correlated with the water depth of the sampling station and organic carbon and total sulfur contents. It is considered that major Se forms are organic Se and elemental Se for the surface samples and organic Se for the core samples. The recent anthropogenic inputs to the Se content of the studied sample are estimated to be negligible. The considerable enrichment of Se in the dark layers of D1 and D2, which exist in the core samples collected at approximately 600 m water depth or deeper in the Japan Sea, is assumed mainly due to the reduction of Se (IV) and Se (VI) in seawater under reduced environments. It has been concluded that the geochemical behavior of Se in marine sediments is controlled mainly by the mode of occurrence, supply of Se to the seawater, redox conditions of environments, biological productivity and formation with migration of volatile Se compounds. The vertical profiles of Se in the core samples should be suitable as a geochemical indicator of the past sedimentary environments.

Paleomagnetic and rock magnetic studies were performed on 22 sediment core samples taken by the Antarctic Geological and Geophysical Research Project (FY1980-1999) of the Japan National Oil Corporation (JNOC). These core samples were made available since 2002 after being transferred to the Geological Survey of Japan, National Institute of Advanced Industrial Science and Technology (AIST), and their reports were released. These cores did not suffer serious magnetic damage, though they have been kept in a room temperature since 2002 after being kept refrigerated for more than 10 years. Our results of measurements of natural remanent magnetization (NRM) and magnetic susceptibility agree with the results of the JNOC reports. Some magnetic parameters, anhysteretic remanent magnetization (ARM) and saturation isothermal remanent magnetization (SIRM) were also shown in our figures, which were not measured during the project. They are important environmental magnetic parameters and would be useful for the research of the Antarctic Ocean in the future.