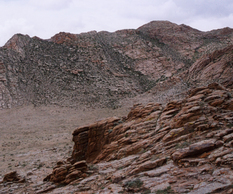 Mongolia is a country with green grass and cattle; yet soil is poorly developed in the mountains, best exemplified by rocky outcrops of granite-composed areas. This picture was taken at magnetite-series biotite granite of the Ongon Khairkhan, SW of Ulaanbaatar. Granite outcrops are well fractured horizontally, which may be formed by pressure release during the ascent and weathering.

Permian radiolarian fossils were discovered from red siliceous mudstone of the North Kitakami Terrane, in the Rikuchu-Seki District, Iwate Prefecture, Japan. This is the first report of Paleozoic radiolarians from the North Kitakami Terrane. Preservation of the radiolarian fossils are bad, because the accretionary complex in the district has been affected by contact metamorphism of Cretaceous granitic rocks. The radiolarian fauna, composed of Pseudoalbaillella sp. cf. Ps. elegans, Ps. sp. cf. Ps. simplex, Ps. sp. cf. Ps. sakmarensis and others, indicates early Early Permian (Asselian - early Sakmarian) in age. It is considered that this radiolaria-bearing red siliceous mudstone was originally overlain by chert and underlain by basaltic rocks in the reconstructed oceanic plate stratigraphy of the Jurassic accretionary complex in Japan.

Chemical characteristics of water-insoluble components in aeolian dust collected in China in spring 2002.

Aeolian dust collected at three stations in China (Beijing, Qingdao, and Hefei) in spring 2002 has been analyzed and their chemical features have been thoroughly discussed. The mass concentrations of aeolian dust collected were high in coarse grains, and the distribution patterns against particle size were different among the sampling stations. When large-scale dust events were observed, the concentrations of suspended particle with a particle size over 2 μm especially increased. The chemical compositions (Al2O3 Na2O, P2O5, Total Fe2O3, Rb, Zr, and La) of all but one aeolian dust sample were almost constant in coarse grains and quickly decreased below 1.1-2.1 μm. This result suggests that the contribution of mineral aerosol to aeolian dust sharply decreased in fine grains. In the dust event of March at Beijing, however, these elemental concentrations were almost constant over the variations of particle size. This fact indicates that the large-scale dust event supplied a large amount of mineral aerosol even in fine grains. The elemental concentration ratios to Al2O3 were almost constant in coarse-medium grains, but suddenly increased below 1-2 μm: the mineralogical composition was homogenous in coarse-middle grains, but changed in fine grains. The grain-size distribution pattern of the elemental concentration ratio has no systematic variations with or without a dust event or among three sampling stations. Therefore, chemical features of aeolian dust coming from inland China and suspended particle accumulated around sampling locations are very similar. On the contrary, some heavy elements (Cr, Ni, Cu, Zn, Mo, Cd, Sb, Sn, Pb, and Bi) had different features from elements that originated form mineral aerosol such as Al2O3. The concentrations and metal/Al2O3 ratios for these heavy metals increased with decreasing particle size. For example, the Cu/Al2O3 and Pb/Al2O3 ratios dramatically increased tenfold to hundredfold with decreasing particle size. These distribution patterns against the particle size suggest that anthropogenic materials were contaminated to finer grains.

Observation of mass concentration and particle size of atmospheric aerosol in east Asia and dry deposition in Tsukuba in combination with optical particle counter observation.

Under the Japan-China joint project, "Studies on origin and transport of aeolian dust and its impact on climate (ADEC)", we have observed the aeolian dust in Beijing, Qingdao, and Hefei in China and Fukuoka, Nagoya, Tsukuba and Naha in Japan since the spring of 2001. The mass concentrations of total suspended particles (TSP) observed by the high-volume air sampler and size distribution observed by the low-volume air sampler were reported in this paper. In addition, the OPC observation in March 2004 and variation of dry deposition in Tsukuba were also reported. From the observation (2001-2004) of mass concentration of TSP we explained the seasonal and local variations. The dust concentration was generally high in spring and intensive observation periods (IOPs) were settled in spring each year. Some large dust events occurred during IOP-1 in April 2002 while dust storms were observed in IOP-2 (March 2003) and IOP-3 (March 2004). The particle size was a bimodal distribution that suggests natural and anthropogenic origins. When the dust storm occurred, the coarser particles increased. The optical particle counter (OPC) was used to understand the variations of size and number of aerosol particles in March 2004. The properties of aerosols varied hourly and it is shown that the OPC has much better time-resolution so it is very useful to observe the short-time variation of aerosols. The variation pattern of the flux of dry deposition in Tsukuba resembled roughly that of the TSP.