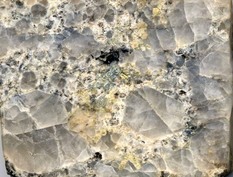 The Tamayama gold deposit occurs in the Hikami granitic rocks (440 Ma), which is one of the older granites in Japan, situated in the northern part of the Rikuzentakata City, Iwate Prefecture. The pegmatitic ore is characterized by coarse-grained minerals, consisting of gray quartz, black or pale green muscovite, and pale pink potassium feldspar. Mining of the Tamayama deposit is reported that it began in the 9th century and was most active in the Middle Ages. The produced gold is said to be utilized for decorating golden hall of Chusonji temple called "Konjikido", which also represents the flourishing Buddhist culture at remote northern part of Japan, ruled by the Fujiwara family in the 12th century. Width of photo: 3 cm..

Geology of the Hiraiwa fluorite deposits and their relevance to the fluorine metallogenic province in Japan.

Fluorite deposits in Japan are distributed mostly in the Sn-W-Cu metallogenic provinces, which are related to the late Cretaceous ilmenite-series volcano-plutonic activities. They occur in hydrothermal veins related to felsic volcanics (4 ore deposits) and granite porphyry (the largest Hiraiwa deposits), in skarn bodies with biotite granite (5 deposits) and in hydrothermal veins within biotite granite (2 deposits). The production statistics indicate that 77 % of the ores were mined from porphyry- and volcanics-related vein type, and 23 % from granite-related skarn and vein types. The outstanding Hiraiwa deposits were formed by extensive fracturing due to regional shearing and magmaascent, and invasion of fractionated felsite magma, then by the associated hydrothermal activities.

The Geological Survey of Japan, AIST, has been publishing the 1:200,000 gravity map (Bouguer anomalies) series of Japan. A new gravity map of Miyazaki district has been published. We compiled gravity data from about 7,300 stations including 387 new gravity stations on land and also compiled sea surface gravimeter data (GH83-1 cruise of GSJ: about 5,900 points) within the map area. The Bouguer anomaly map with an assumed density of 2.3 g/cm3 (2300 kg/m3) shows clear correlation between the geological structure pattern and the gravity anomalies in general. Long wavelength pattern of the largest low anomalies is coincident with the Miyazaki-oki basin which located at the landward side of trench junction. And the geologically well-known bending pattern of the Shimanto belt caused by a counterclockwise rotation of southern Kyushu with respect to northern Kyushu is also seen in long wavelength anomaly pattern. Short wavelength low anomalies corresponding to Hitoyoshi, Kobayashi and Miyakonojo basins are apparent. And a low anomaly in Miyazaki plain and high anomalies surrounding the plain are clearly visible in a high-pass filtered map. Apparent short wavelength anomalies are seen in the Kyushu mountains but they are thought to be effects derived from an inappropriate assumption of the crustal model density (2.3 g/cm3: default value for the GSJ's gravity map series) to this area. Optimum densities in northern part of the map should be larger than 2.3 g/cm3.

Preliminary study on behavior of uranium nuclides (238U, 234U) leached from JG-2 (granite).

In order to elucidate dissolution-adsorption-precipitation behavior of uranium nuclides (U- 238 and U-234) and chemically controlling factor under environmental conditions, a leaching experiment of uranium nuclides from JG-2 granite was preliminarily studied at 80°C in chloride and sulfate systems. The results show that pH is an important factor that controls the U leach while the redox potential may also be important. It is estimated that sulfate type is superior to chloride type for U concentration in spring water. The reaction system and experimental conditions were discussed for better experiment. It was also shown that U-234/U-238 activity ratios were over 1, which is often observed in the environmental waters. Model calculation was conducted to discuss the parameters that effect on U-234/U-238 activity ratios.

Fluxes of polycystine Radiolaria were examined to clarify temporal and regional variations in production and percentage assemblages in relation to hydrographic conditions. Three time-series sediment traps were deployed in the central North Pacific along 175°E for about one year, beginning in June 1993. The trap sites were located in the subarctic, the transitional, and the subtropical water masses.
Temporal fluxes of polycystines showed large variations during the experiment. In the subarctic water mass, high polycystine fluxes were observed during summer to fall, while in the transitional and subtropical regions any relationship was not seen between the polycystine fluxes and sea surface temperature. High polycystine fluxes observed from the subarctic and transition zones can probably be ascribed to high food availability. The polycystine annual mean flux through the experiment was highest at the subarctic site, while that of the transition site was lower than that of the subtropical site. This pattern does not parallel the latitudinal variation in the total mass, opal or organic matter fluxes recorded from the same experiments.
The relative abundance of most of the families did not vary much during the experiment at each site; i.e., polycystine faunal composition remains fairly stable in each oceanic climatic zone. This is likely to be because most polycystine radiolarians are produced in the depths where there is little seasonal environmental change. Latitudinal changes of total polycystine assemblages of the three sites are clear. Plagiacanthidae dominate the assemblage from the subarctic site, and Actinommidae become abundant in the assemblage from the transitional zone. No single family dominates the total assemblage from the subtropical region. These faunal differences between the climatic zones probably relate to differences in temperature of the water at depths of 50-200 m where most polycystines live. Consequently, the percentage abundance of sinking polycystine radiolarians retain a great deal of environmental information on the water masses below the seasonal thermocline in each climatic zone, but possibly do not record much information about seasonal oceanographic changes in the surface layer above the seasonal thermocline.