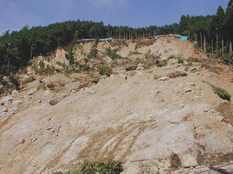 A debris-flow disaster occurred in the Atsumari River Basin, Minamata City, Kumamoto Prefecture, in the early dawn on July 20, 2003. A slope failure of unstable and jointed andesite lava near a knick point in the midstream segment of the Atsumari River Basin immediately resulted in the debris flow. The slip occurred around the boundary between the andesite lava and the underlying weathered tuff breccia acting as a permeable layer and an aquiclude, respectively.

A debris-flow disaster occurred in the Atsumari River Basin, Minamata City, Kumamoto Prefecture, in the early dawn on July 20, 2003. The disaster was caused by a slope failure occurring near a knick point in the midstream segment of the Atsumari River Basin. This area is underlain by Cretaceous sandstone and mudstone of the Shimanto accretionary complex and Pliocene highly weathered tuff breccia and jointed, relatively fresh andesite lava, in ascending order. Among them, the unstable and jointed andesite lava was slipped and immediately resulted in the debris flow. As the slope failure occurred corresponding to the peak of heavy rainfall, it is considered that the slope failure resulted from a rapid increase of potential of groundwater in the andesite lava due to the heavy rainfall. The slip occurred near the boundary between the andesite lava and the tuff breccia acting as a permeable layer and an aquiclude, respectively.
The debris-flow deposits along the Atsumari River are composed mainly of gravels and rather poor in muddy sediments. On the other hand, the 1997 Harihara debris-flow disaster resulted from a slope failure of highly weathered andesite lava after the peak of the heavy rainfall, and the debris-flow deposits are rich in muddy sediments. In the Harihara River Basin, the andesite lava was sheared by tectonic movements. Therefore, the remarkable difference of the mechanism between both two disasters is considered to be related to the degree of weathering of andesite lava caused by tectonic backgrounds in the slope failure areas.

Estimation of barometric responses of groundwater levels at observation stations of the Geological Survey of Japan, AIST in and around the Kinki district.

Geochemistry of biogenic silica, carbonate materials and sea salts in the coastal marine sediments around the Japanese islands.

In order to characterize the geochemical behavior of elements in the biological and sea salts origin materials, the whole major elements together with the biogenic silica (Bio.SiO2), carbon dioxide (CO2), and water soluble chlorine (Cl) were analyzed for about 200 coastal marine sediments collected around the Japanese islands. The average abundance of Bio.SiO2 is the most higher in sediments from off SE Hokkaido which have been affected by the Oyashio current. The sediments from off Tokai situated in the region of the Kuroshio current are clearly depleted in Bio.SiO2. The Bio.SiO2 and Cl are generally enriched in the fine sediment fraction than the coarse one, and positively correlated with water depth of the sampling stations. The CO2 is dominant in the coarse sediment distributed in relatively shallower water depth. Although most representative carbonate mineral is CaCO3, dolomite is occurred in some samples containing a large amount of CO2. It is considered that all the heavy metals containing toxic trace elements are not enriched in the sediments of Bio.SiO2, carbonate minerals and sea salts. In general, most heavy metals are contained more in fine fractions than coarse fractions of sediments, and those are sometimes enriched during the early diagenesis. The evaluation of biological and sea salts origin materials in the coastal marine sediments will be indispensable for estimation of geologic background in the catchment area.

Clinopyroxenite in serpentinite melange of the “Kurosegawa Belt” in the Izumi-Tomochi area, Kumamoto Prefecture, central Kyushu

Clinopyroxenite blocks are sometimes included in serpentinite melange of the “Kurosegawa Belt” in the Izumi and Tomochi area, Kumamoto Prefecture, central Kyushu. They are up to 2 km in length and the largest body in Japan. The clinopyroxenite is composed of diopside with a small amount of serpentine. Diopside is usually 1 mm to 10 mm in length with a maximum length that reaches 10 cm and has many parallel partings. This clinopyroxenite site is important as a typical diopside (diallage) occurrence in Japan. The parallel partings generally develop as the diopside crystal becomes larger. A small amount of tremolite occurs along the partings and among the diopside crystals.
By the electron probe microanalyzer (EPMA) analyses, there is no difference in the chemical composition among diopsides from three clinopyroxenite blocks. The chemical composition of diopside is almost same as those from other areas in the “Kurosegawa Belt”.
As the clinopyroxene hornblende gabbro block in the serpentinite melange has a hornblende KAr age of 371±19 Ma, it is important to examine the age of the ultramafic and mafic rocks in the “Kurosegawa Belt”.