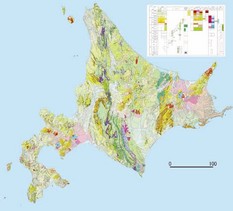 Seamless Digital Geologic Map of Japan is a database of digital geologic map which is compiled at a scale of 1:200,000 with unified legend and seamless boundaries throughout Japan. We compiled Hokkaido area in 2003, and gradually extend southwards. For further information, please refer to our web site at www.aist.go.jp/RIODB/db084/.

Grain-size distribution and chemical composition of water-insoluble components in aeolian dust collected in Japan in spring 2002.

We have studied chemical characteristics of aeolian dust (Kosa) during the transportation from China to Japan. Dust samples were collected at Naha, Fukuoka, Nagoya and Tsukuba in Japan from March to May 2002 and analyzed for the chemical composition of water-insoluble components. The chemical concentrations of most elements in the air were the highest during a dust event, and their particle size distribution patterns are characterized by having one large peak at 2.1-7.0 μm. Most elements are considered to originate in mineral aerosol because mass concentrations have the same distribution patterns. However, some elements, Cd, Sn, Sb, Pb and Bi, were highly enriched in small particles (under 1 μm), which consist of mainly carbon aerosol released by a vehicle, plant and heating system. These elements are considered to originate in anthropogenic materials.
The elemental concentrations divided by Al2O3 contents are useful to examine the change of mineralogical composition or estimate the contribution of anthropogenic materials. The concentration ratios of most elements were almost constant through the particle size, but often high in the smaller particle (0.65-1.01 μm). The particle's mineral composition probably changes at 1 μm. On the contrary, distribution patterns of some heavy metals having anthropogenic origins revealed that the fraction of anthropogenic materials in aeolian dust gradually increased with the decrease of particle size and suddenly rose at 2 μm of particle size.
Finally, we examined geochemical differences between two periods (dust event and non-dust event) and among observation stations. Some elements (P2O5, K2O, T-Fe2O3, Zr, Nb and Mo) have systematic differences among sampling locations during non-dust event and showed that aeolian dust contains some local materials. However, these systematic differences disappeared when a dust event was observed and revealed that a dust storm carried a large amount of aerosol from East Asia to Japan and made a nearly homogeneous chemical composition of dust at each station.

Eruptive history of Numazawa volcano, NE Japan: New study of the stratigraphy, eruption ages, and eruption volumes of the products

Marker tephras TB-8 and Ky3 of Middle Pleistocene age are redescribed in this paper. TB- 8 and Ky3 are conspicuous key beds indicating the middle part of the Tama Loam and the lower part of the Kiyokawa Formation of the Shimosa Group, respectively. These tephras have been thought to be correlated with each other as they both include orthopyroxene crystal grains exhibiting high refractive indices. However, it has been also pointed out that they are largely different in the range of the refractive indices. Detailed observation of these tephras revealed that TB-8 is composed of six fall units which are different with each other in the refractive indices of orthopyroxene crystal grains. Ky3 is considered to be a mixed layer of some units of TB-8. Moreover, marker tephras TB-9 and Ky3.5, which are settled above TB-8 and Ky3, respectively, both include hornblende crystal grains exhibiting the same refractive indices. Therefore, the combination of TB-8 and TB-9 is correlated with that of Ky3 and Ky3.5.
TB-8 (Ky3) widely occurs in the southern and central parts of the Kanto Plain including a metropolitan area. Only a few widespread marker tephras are known in the subsurface of the middle part of the Kanto Plain. This tephra is, therefore, important as a key bed for a study of a subsurface geologic structure in such an urban area.