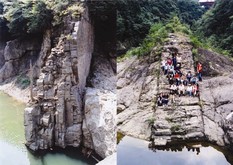 Middle Miocene dikes in the eastern part of Aichi Prefecture.

In the Horai-Shitara area in the eastern part of Aichi Prefecture, a large number of Middle Miocene dikes intrude the Miocene Shitara Group and pre-Tertiary basement. (Left) An andesite dike, named as Anataki dike, exposed in Lake Horai. At this locality, it is about 8 m wide, strikes N-S, and dips almost vertically, intruding felsic volcanic rocks of the Horaiko Formation (Nansetsu Subgroup). It is a constituent of the Shitara central dike swarm. (Right) An altered andesite dike exposed in Yuya. This N-S trending, 5 m wide dike has been established as a natural monument.

Japanese Illite Crystallinity standard (JIC) is proposed as the standard specimens of Illite Crystallinity (IC) for paleo-geothermal indicator. The JIC composed of six specimens is collected from the Sambagawa metamorphic rocks and the Cretaceous Shimanto accretionary complex in the Kii Peninsula, Southwest Japan. Each specimen consists of pelitic rock fragments of 2-3 cm in lenghth. The six JIC specimens measured at our laboratory indicate the following IC values; 0.25, 0.28, 0.33, 0.44, 0.48 and 0.56 Δ2°θ, respectively. The IC values measured at our laboratory show a well linear correlation with the international standard of the CIS (Crystallinity Index Standard). In addition, the epizone corresponds to metamorphic temperature of the pumpellyite-actinolite facies, and the anchizone is equivalent to metamorphic temperature of the prehnite-pumpellyite facies. According to the CIS calibration and comparison with metamorphic facies, the JIC would be the most useful paleo-geothermal indicator. As a result of calibration by the JIC, it is possible to compare the IC values measured at different laboratories.

Variation of concentrations and physicochemical properties of aeolian dust obtained in east China and Japan from 2001 to 2002.

In order to clarify the variation and characterization of dust particles, we started the Japan-China joint project, “Studies on origin and transport of aeolian dust and its impact on climate”. We set up sampling instruments in Beijing,Qingdao and Hefei in China and Naha, Fukuoka, Nagoya and Tsukuba in Japan and collected aeolian dust that originated in the desert area of western China. In this study, we collected the aeolian dust from February 2001 to May 2002 and studied the monthly variation of dust concentrations.
The one-year observation data show that the aerosol has a bimodal size distribution (one peak at around 0.5 μm corresponds to particles of anthropogenic origin and another peak at around 4-5 μm reflects aeolian dust of continental origin) and the coarser particles increased when a dust event occurred.
The seasonal variations of dust concentration showed that the aeolian dust content in spring is higher than other seasons. It sometimes became high in winter in Qingdao.
The aerosol concentration under usual conditions at each observation station in Japan does not differ so much, however that in China is larger than in Japan. During the intensive observation period (April 2002) when a dust storm event occurred in China, the coarser fraction increased in grain size, and the average dust concentration increased. The aerosol concentration seems to be in the order of Beijing > Qingdao > Hefei and Beijing > Fukuoka > Nagoya > Tsukuba > Naha.
The main chemical components of water-soluble fraction are supposed to be (NH4)2SO4 in finer particles and Ca(NO3)2, CaCl2, NaNO3 and NaCl in coarser particles. Aluminum content in water-insoluble fraction was high in coarser particles, and this confirmed that they consist of a mineral component.

The geology of the Yatsuhashi area in Shitara Town, Aichi Prefecture has been investigated to draw the distribution of clastic sediments of the Lower Miocene Hokusetsu Subgroup (lower part of the Shitara Group). A 5.5 km x 4 km area has been mapped in detail. The clastic sediments are lithologically divided into four formations: from base to top, the Taguchi Formation (dominantly coarse-grained clastics such as ill-sorted breccia and conglomerate), the Kawakado Formation (dominantly sandstone), the Ohno Formation (dominantly mudstone), and the Kadoya Formation (felsic tuff and tuffaceous clastics). An overall upward-fining sequence characterizes this subgroup. The coarse clastics of the Taguchi Formation are mostly fluvial and debris-flow deposits and in minor amounts are probably of talus origin. These clastics fill past-valleys incised into pre-Tertiary basement, resulting in an irregular distribution. On the other hand, the other formations are made of well-bedded marine sediments, the distribution being not complex. The Hokusetsu Subgroup is covered unconformably by volcanic rocks of the Middle Miocene Nansetsu Subgroup (upper part of the Shitara Group). In the eastern part of the mapped area, intermediate to mafic volcanic intrusions form a north-south striking dike swarm.