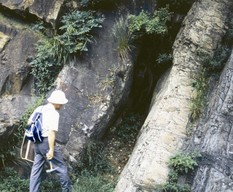 Parallel unconformity within Paleozoic rocks in the Sino-Korean Massif.

Detrital garnets from Paleozoic to Tertiary sandstones in Southwest Japan.

Garnets are classified into low P/T type, intermediate P/T type ( Ia, Ig1, Ig2), high P/T type,eclogite type and grandite. They are characteristic of low-pressure metamorphic and granitic rocks,intermediate-pressure metamorphic rocks ( Ia : up to amphibolite facies, Ig1 and Ig2 : granulite facies),high-pressure metamorphic rocks, eclogites and calcareous metamorphic rocks, respectively. Ig1 and Ig2 garnets are rich in Mg, and the latter has not been reported from metamorphic rocks in the Japanese Islands, but from those of Archean age in the Asian continent. Garnets exclusive of grandite are collectively called pyralspite.
Detrital garnet analysis was carried out on the basis of the above-mentioned classification of garnets on Devonian to mid Tertiary sandstones in Southwest Japan. The results indicate that assemlage of detrital garnets changed markedly in the following stages : 1) post-Devonian - pre-Permian, 2) latest Middle to mid Late Triassic, 3) mid Cretaceous and 4) Cretaceous / Paleogene boundary. In the time from Permian to stage 2, grandites were predominant in some places and pyralspites in others,whereas after that pyralspites prevailed everywhere with a few exceptions. Enterring to the Late Cretaceous, low P/T type garnets began to increase in the Median Zone of Southwest Japan and the Chichibu Terrane as the result of exhumation of the Ryoke Metamorphic and Granitic Rocks in contrast of its decreasing in the Shimanto Terrane, where Ig2 garnets increased twofold or more at the begining of the Paleogene.
The most common detrital garnets are intermediate P/T type ( Ia, Ig1, Ig2), followed by low P/T type, grandite, high P/T type and eclogite type in order of abundance on the whole in Southwest Japan. The former three are considered to have been supplied mainly from Precambrian to Paleozoic metamorphic and granitic rocks in the Asian continent with minor derivations from the Japanese Islands.On the other hand, main source of high P/T type detrital garnets must have been the Sangun Metamorphic Rocks.

The continuous GPS array observation by the Geological Survey of Japan, AIST.

A regional continuous Global Positioning System (GPS) array, consisting of AOA Turbo Rogue receivers and Chokering antennas, was established by the Geological Survey of Japan (GSJ), AIST, mainly in and around the Kinki district in 1996. The number of the stations was reduced from 14 to 5 in 1999, and a new analysis strategy was implemented. The repeatability of the station coordinates analyzed through the new strategy is as same as the old one. In comparison with the coordinate variations of nearby GEONET stations, the secular variation is similar, but the overall repeatability is worse. In addition, a predominant half-year variation is found in the GSJ's coordinates. The number of epochs of carrier phase data observed by some GSJ's stations shows a half-year variation and has a strong correlation to a variation of a global total electron content (TEC). A similar half-year variation of the number of the epochs is also found at an IGS station with an AOA Turbo Rogue receiver but not at the nearby station with an Ashtech receiver in North America. These results imply that the half-year variation in GSJ's station coordinates is attributable to worse quality of the GPS observation data due to ionosphere perturbation, which is peculiar to Turbo Rogue receivers.

Verification of a nonsecular change in a borehole strainmeter data using GPS: A case study of the Yasutomi station of the Geological Survey of Japan, AIST.

GPS-derived station coordinate variations around the Geological Survey of Japan (GSJ)'s Yasutomi station nearby the Yamazaki fault, southwestern Japan, were investigated to see if changes, corresponding to a non-secular strain anomaly from April in 2002 observed through a nearby borehole strainmeter, could be detected. An irregular coordinate change was found for that period at the Yasutomi GPS station, but not at the surrounding GPS stations of the Geographical Survey Institute's permanent GPS network (GEONET), which could imply a local aseismic slip along the Yasutomi fault. But due to unknown seasonal and semi-seasonal variations of the Yasutomi station, it is difficult to decide if the change was attributable to true crustal deformation.

Physical properties of Cretaceous to Paleogene granitic rocks in Japan: Part 1. A case of the northern Tohoku region.

The distribution of granitic rocks occupies 12 percent of the Japanese Islands, but the physical properties of the granitic rocks such as density, porosity, natural remanent magnetization (NRM), and ultrasonic velocity have only been reported for small limited areas with an exception of magnetic susceptibility for the regional areas. The aim of this study is to clarify the physical properties of granitic rocks in the Japanese Islands by the systematic measurements under the same precision and to try to discuss the characteristics of each exposure area and the differentiation process of magma.
Samples were collected at about 570 outcrops from four areas (Kitakami Mountains, Taiheizan, Kurikoma-Narugo and Murakami areas) in the northern Tohoku region. All the samples were measured on density, magnetic susceptibility and NRM.
The results are summarized as follows:
1. Density
The mean density of these areas varies from 2.66 to 2.77(g/cm3 =103 kg/m3), the lowest one is Murakami area, the second Kurikoma-Narugo area, the third Taiheizan area and the highest is Kitakami Mountains.
2. Porosity
There is no large difference between the four areas. The variation range is about 0.4-0.5 (%).
3. Magnetic susceptibility
All the samples can be sectioned within a zone bounded by two straight lines, in a density-magnetic susceptibility chart: The samples in these four areas lie in each characteristic zone. Magnetic susceptibilities near along the lower line are subject to the content of paramagnetic rock-forming iron minerals in granitic rocks.
4. Natural remanent magnetization (NRM)
The relation between the density and NRM shows a pattern similar to that between density and magnetic susceptibility but less correlative. Königsberger ratio (Qn) of 70 percent or more granitic rocks shows less than 0.4 in this region. Consequently, NRM is negligible for a case of analysing magnetic anomaly in the field.