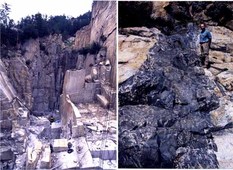 The Seto Inland Sea region is the best place to study granitoids, because the largest batholith is located here and good outcrops are available along coast of hundreds of island. Various granitoids and mingling phenomena with gabbroic magmas are best seen in this region (cf. text of 95-116 page). Left: Baba quarry of the Kitagi Island where biotite granite is mined for dimension stones. Right: Synplutonic mafic dike intruding into granodiorite of the Ryoke Belt, Tanoura Peninsula, Shodo Island.

Late Cretaceous granitoids (41 samples) and gabbroids (6 samples) of the Inner Zone of SW Japan are studied chemically and microscopically in the southern Okayama - Kagawa Prefectures. The plutonic rocks are divided into the Sanyo Belt at north and the Ryoke Belt at south by distribution of the Ryoke metamorphic rocks and tungsten deposits. The former is composed of coarseto medium-grained, massive granodiorite to monzogranite of batholithic units, which often contain pink K-feldspar, and fine-grained granitoids of various composition. The latter consists of coarse- to medium-grained, massive or stressed granodiorite to monzogranite of batholithic units, and fine-grained biotite monzogranite stocks of Aji granitoids. As compared with the Ryoke granitoids, the Sanyo granitoids are higher in silica and alkali contents, especially of K2O, and poorer in Al2O3 and lower in alumina saturation index (ASI). Rb is alsorich in the Sanyo granitoids, particularly of muscovite-biotite leucogranite, and poor in the Aji (hornblende-) biotite granitoids. Sr contents show a reverse correlation with Rb. Therefore the Rb/Sr ratio is the highest in the leucogranite (~39) and lowest in the Aji granitoids (0.2). The Rb/Sr ratio implies degree of mgmatic fractionation. The fractionated leucogranite is also high in trace amount of Y, W, Sn, U, Th, Ta and Nb; many of these elements are concentrated in the surrounding ore deposits. Chondrite normalized REE patterns can be grouped into (1) those with intermediate values on LREE, which become low from Eu to HREE; observed on the Sanyo granitoids and Ryoke granitoids, (2) those having higher values in all the elements than (1) with moderate Eu anomalies; observed typically on the pink Mannari Granite, and (3) flat pattern rich in HREE with strong Eu anomalies, observed not on the Aji Granite but on the fractionated leucogranite. The first pattern can be explained by the presence of garnet and amphibole in the protolith; the third pattern may be due to plagioclase fractionation. The Ryoke granitoids, the Aji granitoids and garnet-muscovite-biotite granite in particular, have higher ASI and δ18O value but lower K2O content than the Sanyo granitoids, implying higher percentage of sedimentary rocks without abundant illites incorporated in the protolith, although both belong to magnetite-free, ilmenite series. Bulk compositions of the Ryoke granitoids are more mafic than the Sanyo granitoids. Mafic igneous rocks are rare in the Sanyo Belt, but are common in the Ryoke Belt where magma mingling and mixing textures are observed at many places. The mafic magmas injection from the upper mantle have occurred almost continuously in the Ryoke Belt during the granitic magmatism, an early phase of which resulted in the regional metamorphism of the Ryoke Belt, and also mingling and mixing of the mafic magmas from depth and felsic magmas from the crust made the bulk composition more mafic in the Ryoke Belt than in the Sanyo Belt.

Characterization of geothermal systems was investigated in two regional scale volcanotectonic depressions, the Kuju-Beppu Graben (KBG), in Japan, and the young-Taupo Volcanic Zone (TVZ) in New Zealand. The distribution patterns of geothermal fields are different. In the KBG they are restricted to areas on and behind only the youngest volcanic front, but are evenly spaced throughout the whole of the young-TVZ. The youngest volcanism (<0.3 Ma) in the KBG comprises andesitic lava domes and stratovolcanoes, but is dominated by caldera-forming or dome-building rhyolite eruptions in the TVZ. The heat sources of the active geothermal fields are assumed to be andesitic magma chambers and consolidated magma plutons in the KBG, and are associated with high-level rhyolitic magma chambers in the TVZ. The different heat sources and heat flow regimes result in different geothermal field characteristics. In the TVZ shallow (500-1500 m depth), exploitable reservoirs contain boiling or near-boiling fluids (250-300 ºC) stored in Quaternary permeable layered aquifers of volcano-sedimentary origin lying above a poorly permeable Mesozoic basement. In the KBG the reservoirs are deeper (1000-2000 m depth) and lower temperature (ca. 220 ºC) because the Quaternary andesitic magma-ambient zone is believed to be deeper than that of the TVZ, and deep-penetrating groundwater extracts heat from fractured volcanics above a thicker conductive zone with lower geothermal gradient. Thus it is concluded that the heat discharged by geothermal fluids in the two volcano-tectonic depressions is greatly controlled both by the depth of the magma-ambient zones, and by the depth to which the cool groundwater convection cells can penetrate.

Three species of the ammonoid genus Utaturiceras, including U. chrysanthemum sp. nov., and two species of Graysonites, from the Soeushinai area of northwestern Hokkaido, are described under revised diagnoses of the genera. They form the basal subzone of the Cenomanian sequence of strata in the studied area. This faunule is recognized in restricted parts of Japan and the correlatable faunule is also known in certain particular provinces of long distance in the world. The reason for this fact is discussed to some extent.

Origin of sulfur in some magmatic-hydrothermal ore deposits of South China.

Mill concentrates of ore sulfides from three magmatic-hydrotherml ore deposits were studied for δ34S at the granite-hosted Xihuashan deposits, and carbonate-hosted Shizhuan and Huashaping deposits. These ore deposits occur in the South China Fold System, which is composed of mid-Paleozoic "miogeosynclinal" sediments dominant in carbonates toward the Devonian age. Averages of the ore sulfides are -0.9 permil for the Xihuashan, +7.0 permil for the Shizhuan and +13.2 permil for the Huashaping deposits. Endogranitic ore sulfur of the Xihuashan and the Shizhuan deposits are considered magmatic, derived from by ca.+2 ‰ δ34S granitic magma, but the carbonate-hosted ore sulfurs at the major part of the Shizhuan and Huashaping deposits are much higher than those expected from rock sulfur δ34S values of the Yanshanian granites of the South China Fold System. Thus, addition of 34S-enriched sulfur into the ore solutions is considered. Devonian and Carboniferous carbonates of the South China Fold System are very high in the δ34S values of structurally substituted sulfate (SSS) sulfur, averaged as +25.7 and +15.7 permil, respectively,which are higher than the reported values from other areas of these ages. The SSS contents of the Paleozoic carbonates are very low at present, but recent carbonates contain typically 0.1 to 1 % equivalent sulfate. The very low SSS contents in the wall rock carbonates and high δ34S values in the ore sulfides may have been resulted from carbonate SSS extracted during recrystallization and somehow mixed with magmatic ore fluids when the granitic magmas intruded, then precipitated as the ore sulfides.