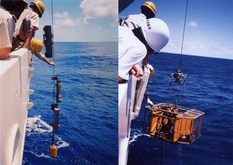 (LEFT) An approximately 50 kilogram-weight (yellow cylinder in the photograph) is attached to the tip of a wire just before a water sampler is thrown into water in order to for it to descent straight down. When a sound wave oscillator, thrown in after the water sampler, reaches the objective location, an equipment called Messenger is sent down from the ship along the wire. Valves of water sampler start closing from top to bottom after collecting samples. A water sampler is pulled out of water when a different type of beep goes off after the last valve automatically closes. This water sampler is designed to prevent contaminated water up to 10 meters deep from getting inside. (RIGHT)This box-type sediment sampler is attached to a long wire to collect sediment samples from the surface of the bottom of the ocean. The valve underneath this equipment remains open until it hits the outer layer of the deposit. This design enables the sediment sampler to collect samples without disturbing the deposit structure. This equipment is also used to collect samples of manganese nodule in the areas where the surface of the bottom of the ocean is covered with manganese nodule.

A 284 marine sediments of terrigenous, hemipelagic and pelagic origin were collected from the different environments, i.e., in the seven sea areas around the Japanese islands (terrigenous sediments), on the Mariana Ridge (hemipelagic sediments), and in the Central Pacific (pelagic sediments). These samples were analyzed together with 31 lake sediments and 41 marine shales for Pt and Pd by atomic absorption spectrometry using a graphite furnace atomizer after solvent extraction separation. The average abundances of Pt and Pd are markedly higher in the pelagic sediments than the terrigenous sediments, with the hemipelagic sediments showing intermediate abundance. Most of the samples analyzed in this study are richer in Pt than Pd, whereas siliceous ooze collected from the central Pacific high productivity zone was generally richer in Pd than Pt. Although the Pt and Pd abundances and water depths of the sampling locations are not correlated, there are clear negative correlations between the Pt and Pd abundances and the sedimentation rates in the studied regions. It is considered that most of the Pt and Pd in marine sediments is originally derived from weathering of crustal materials, and both the elements have been precipitated and accumulated as the elemental and oxide forms by the involvements in biological transport processes. The great enrichments of Pt and Pd in pelagic sediments may result from the very low sedimentation rates and strongly oxidizing environments. The different vertical distributions of Pt or Pd and organic C concentrations in the central Pacific cores suggests that the formation of organometallic complexes of Pt and Pd, and migration of both elements during the early diagenesis are not so significant except in very rare cases. The crustal abundances for Pt and Pd are tentatively estimated as 2.7 ppb and 1.9 ppb, respectively.

We have studied the geochemical behavior and the origin of toxic trace elements in volcanic ash and alluvial soils. The volcanic ash and soil samples were collected from the southern to northeastern Kanto district, Japan. The concentrations of heavy metals containing toxic trace elements in the tephra layers are generally lower than those of loam layers in the Kanto Loam Formation. The tephras are proved to be poor in alkali and alkali-earth metals, and rich in Al2O3, TiO2, H2O, and toxic trace elements in most cases through its weathering process. The elements, such as As, Sb, Pb, Bi and Cd are generally enriched in the uppermost layer of the volcanic ash soils. This may be caused by biogenic concentration process, but not by recent environmental pollution. The vertical variation of the elemental concentrations in alluvial soils are generally smaller than that of volcanic ash soils. Several sand layers derived from basement rocks are found in the core samples. Compared to the mud layers, sand layers are poor in heavy metals including the toxic trace elements. The alluvial soils existed under the effects of saline water in the past tense are significantly dominant in As and Sb, and depleted in Mo. This may results from the fixation and diffusion of these elements during diagenesis. Compared to the crustal abundance, both the volcanic ash and alluvial soils are rich in As, Sb, Pb and Bi, while there is no significant difference in the Cd and Tl contents. The enrichment of the four toxic elements may be caused by biogenic and diagenetic enrichment process, contribution of seawater and the supply of long-range aeolian dust derived from the Asian continent.

Practical method of determining plagioclase twinning laws under the microscope.