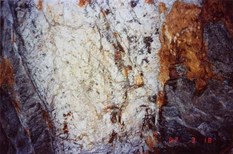 Xenothermal-type ore veins of the Chiemon 15th vein at 13mL, Akenobe mine, Hyogo Prefecture. The Akenobe mine was opened in 807 and mined systematically since 1599. The veins scatter in an area of E-W 4.6 km, N-S 3.9 km in the central Hyogo Prefecture, and provided composite ores containing Sn, W, Cu, Zn, Pb, and Ag. The mine was closed in March 1987 by lowering domestic prices of the recovered metals.

Diatom biostratigraphy and molluscan fossils of the Miocene formations in the southern part of Miyagi Prefecture and the northern part of Fukushima Prefecture, Japan.

Diatom and molluscan fossils are reported from the Miocene Yamairi Formation in the southern part of Miyagi Prefecture, and the Akashiba Formation in the northern part of Fukushima Prefecture, Japan. The marine diatom assemblages from the two formations are correlative with the lowest part of the upper Middle Miocene Thalassiosira yabei Zone (NPD 5C) of the Neogene North Pacific diatom zonation. The molluscan assemblage from the middle part of the Akashiba Formation includes elements of the Shiobara-type molluscan fauna. The age of the Shiobara-type molluscan fauna is consistent with the diatom age. The diatom biostratigraphy of this study provides a precise chronology for the Miocene sequence in this area.

Diatom biostratigraphy is revised for the Sugata Formation (Miocene) in the Nadaura area, Toyama Prefecture, central Japan. The Sugata Formation is mainly composed of diatomaceous mudstone, containing diatom fossils throughout the formation. Crucidenticula nicobarica Zone (NPD 5A), Denticulopsis praedimorpha Zone (NPD 5B) and Thalassiosira yabei Zone (NPD 5C) are identified with diatom biohorizons of Yanagisawa and Akiba (1998) including D 51, D 52, D 53 and D 55 in the Sugata Formation. C. nicobarica occurs 10 to 20 percent of total assemblage in most of the samples from the upper part of NPD 5A to the lower part of NPD 5B, and decreases rapidly to less than 1 percent between the biohorizon D51 (first occurrence of Denticulopsis praedimorpha var. minor; 12.9 Ma) and D 52 (last occurrence of C. nicobarica ; 12.7-12.8 Ma). The sediment accumulation rate curve of the Sugata Formation suggests that a hiatus exists between the diatomaceous mudstone and the glauconite Sandstone in the uppermost part of the Sugata Formation.

Chemical characteristics of the mineralized granitoids (I): Mo and W provinces of the Inner Zone of Southwest Japan.

In order to know chemical parameters useful for mineral exploration including Mo, W and Sn, selected granitoids of 47 samples from the Mo province, W province and barren province were analyzed by polarized XRF spectrometer, XLAB 2000. The granitoids of the Mo province are least in Al2O3 and ASI, Ga, K2O and Rb, compared with those of the W and barren provinces. Mafic trace elements such as V, Cr, Zn and Co are controlled by ferric/ferrous state of the granitoids.Trace amounts of Mo is high in the granitoids of the Mo province and least in the barren province. It is rather strange that W is high in both W and Mo provinces. Mo appears to be a useful indicator for molybdenum deposits, and both W and Sn could be useful parameter for mineral exploration of Sn-bearing tungsten deposits in rock geochemical exploration. Compared with conventional wet-chemical analyses of the 1960s, low correlation coefficients (r) are obtained from MnO (0.83), P2O5 (0.85), Al2O3 (0.87) and Na2O (0.88). Diversity from unity (m) is low on P2O5 (0.79) and MnO (0.83), but high on K2O (1.15), implying that the Lawrence Smith's method gives onsistently low values on K2O contents relative to the XRF. Good correlations between the two methods are seen on CaO and SiO2 , and also on trace amount of Sn with AA method.

In the west-central Hyogo Prefecture, there occur the late Cretaceous volcanic and plutonic rocks of intermediate to felsic compositions. Small vein, replacement and disseminated-type deposits with copper, arsenic and iron are associated with the granitoids. The granitoids are found to be composed of magnetite-series including the Yazu-Kanzaki plutonic complex and the Hikihara Granite, and ilmenite-series consisting of the Mochigase Granite and Wadayama Granite. Fourteen major components and 31 minor components were analyzed by polarized XRF. The ore deposits are associated with the magnetite-series granitoids having particularly high magnetite contents. Petrochemical contrasts are seen between the magnetite-series and ilmenite-series granitoids. Within the magnetite series, the mineralized ganitoids may be higher in bulk Cu contents than the barren granitoids. Copper contents of granitoids could be an indicator to copper mineralization, because CuS phase (intermediate solid solution, iss) is stable in a magmatic temperature. An average Cu content of the Yazu-Kanzaki granitoids is 4 ppm, while main copper producing area with similar volcano-plutonic history such as North Chile is averaged as 62 ppm (Ishihara et al., 1984), indicating a poor potentiality of copper in the west-central Hyogo Prefecture. The magnetite-series granitoids are too low in SiO2 and Al2O3 contents to be qualified as Pb-Zn mineralized granitoids.

Late Jurassic radiolarian fauna from the Ikenohara Formation of the Kurosegawa Belt in the Toyo-Izumi area, Kumamoto Prefecture, Kyushu, Japan.