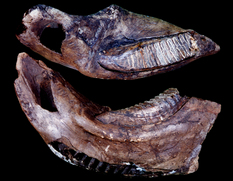 Left mandible fossil of Naumann's elephant from the Hanamuro River in Tsukuba City.

Large mammalian fossils, Naumann's elephant (Palaeoloxodon naumanni (Makiyama)) are abundantly yielded from the middle reaches of the Hanamuro River in Tsukuba City, Ibaraki, Japan. Figured specimen collected by Mr. S. Ichihara in Feb., 1977 was identified into the left mandible with left lower third molar of P. naumanni (Masuda et al., 1978). Lower figure indicated a lingual view of the specimen (reduced to 26 % in natural size). Upper figure shows a left lower third molar in left mandible, which is characterized by lamellae of tooth with enamel ring. The fossil-bearing horizons are dated as 35,000 - 25,000 y.B.P. and are assigned as a cooler climate before the last glacial maximum. The specimen is exhibited at the Sakura Historical and Ethnological Museum of Tsukuba City. See Nakashima et al. in this issue.

To survey the uranium concentration and understand the relationships among uranium series nuclides in the environment, the spring waters in Fukushima Prefecture were studied. The average U concentration in spring waters related to granitic rocks was higher than those related to schist, sedimentary rocks and pyroclastic rocks. Most of the U concentrations are less than 0.2 ppb, and this may be deduced from the reducing underground environment. The U-234/U-238, Ra-226/U-234 and Rn-222/Ra-226 activity ratios are greater than 1. The Ra concentration seemed to have a correlation with the water temperature. The U concentration in waters related to the granitic rocks has positive relationships with the redox potential and dissolved oxygen content and negative relationships with pH. The Rn is dissolved much more than expected from Ra. The source of the excess Rn is assumed to be the Ra in the rock around the micro pass way, and it is qualitatively deduced by using a simple model.

A new gravity map of the Fukuoka district was published. It is a map of the 1:200,000 gravity map series by the Geological Survey of Japan, AIST. The gravity data were compiled from 11,937 stations including 1,513 new stations. These new gravity surveys were carried out around the Fukuoka area. We show the table with gravity data for 706 new stations around the central part of the Fukuoka City area. This Bouguer gravity anomaly map with an assumed density of 2.3 g/cm3 clearly revealed the structural boundaries between the central part of the Fukuoka City and its surroundings.

Occurrences of large mammalian fossils and paleoenvironment of the latest Pleistocene deposits in the middle reaches of the Hanamuro River, Tsukuba City, Ibaraki, Japan.

Abundant fossils of large mammals were collected from river beds of the Hanamuro River in eastern part of Tsukuba City, Ibaraki Prefecture, Japan. Most fossils are identified with tooth and tusk of the Naumann's elephant, Palaeoloxodon naumanni (Makiyama). As a result of the excavation around the Hanamuro River area, the mammal-bearing horizons are assigned to the uppermost Pleistocene deposits, and are dated as ca. 35,000 to 25,000 y. B. P. by 14C method. Macroscopic plant and wood remains obtained from the mammal-bearing horizons are recognized as Pinus, Picea, Larix, Tsuga, Styrax and Betula. Those plant taxa indicate that the horizons deposited under the cool-temperate climate. From these facts, P. naumanni lived around the Hanamuro River area before the last glacial maximum of such cooler climate.