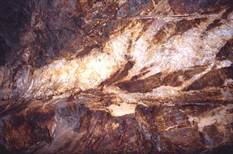 Tungsten quartz veins of the Otani mine, Kyoto.

The Otani mine, one of the largest tungsten mines in Japan mined until 1983, is composed of scheelite-chalcopyrite-pyrrhotite-quartz veins filling NNE fractures formed by right-lateral shearing in late Cretaceous biotite granodiorite with 98.9 Ma Rb-Sr age. The sulfides of the host granodiorite and ore veins have negative δ34S values indicating a sedimentary biogenic source(see p. 461 - 477 in the text). This picture is taken at the Chuo Adit Level of No.2 Vein at north mining face of August. 1980. "Greisenization"was seen along the granodiorite contact.

Sulfides from late Cretaceous-Paleogene ore deposits of the Inner Zone of Southwest Japan were analyzed for 34S/ 32S ratios (δ34SCDT values) on 5 samples from the Ryoke Belt, 18 from the Sanyo-Naegi Belt, 15 from the Uetsu- Kanto District and 47 samples from the Sanin-Shirakawa Belt. Together with the published data, the average δ34S values are calculated for individual deposits of the whole region; 109 localities for the ilmenite-series granitic belt and 56 localities for the magnetite-series granitic belt.
The sulfur isotopic ratios vary regionally rather than with sulfide species or types and commodities of the ore deposits. The δ34S values are generally negative in the fore-arc, ilmenite-series belt, and positive in the back-arc, magnetite-series belt. This regional variation is considered to reflect the ilmenite-/magnetite-series pairing of the genetically related granitic or volcanic activities, in which the positive δ34S ore sulfur was derived from a deep igneous source, but the negative δ34S sulfur was originated in biogenic sulfur of the accreted sedimentary complex. Within each terrane, δ34S values and mineral commodities vary locally, which is called domains in this paper. A few negative δ34S minima are observed in the Kinki, Hiroshima and Mino domains. These anomalies may have been brought by the most sediments-dominant granitic magmas generated within the accretionary sedimentary complex.
The paired δ34S belts, called the Japanese-type pattern, may be unique to island arcs where their fore-arc sediments have been accreted in the arc- front associated with the back-arc rifting.