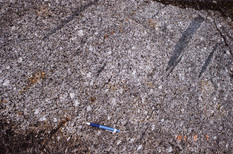 Elongated mafic enclaves in the K-feldspar porphyritic hornblende-biobite granodiorite at Kawabata, south of the Asuke township..

This strongly foliated granodiorite in the Ryoke metamorphic belt shows high δ18O value of +12.1‰, although it belongs to I-type. Relationship between the tectonic shearing and supply of 18O-rich fluids from the crustal materials is suggested (see Text p, 421- 438).

A planktonic foraminiferal fauna consisting of 39 species was obtained from the upper Miocene Kubota Formation in the eastern Tanagura area, Northeast Japan. The general composition of the foraminiferal fauna indicates that the Kubota Formation was deposited under an open sea environment influenced by a warm current. The presence of Neogloboquadrina acostaensis, absence of Globorotalia plesiotumida, and the first occurrence of Globorotalia merotumida in the middle part of the Kubota Formation enable a correlation with Zone N.16 of Blow (1969). This foraminiferal zonal assignment is consistent with such stratigraphic data as radiometric, calcareous nannofossil, radiolarian, and diatom ages. We recognize four biohorizons defined by the first occurrences of N. acostaensis, Globorotaloides falconarae, and G. merotumida and the last occurrence of Neogloboquadrina cf. mayeri. These biohorizons will be useful for determining the age of Zone N.16 in Japan.

Oxygen isotopic constraints on the geneses of the Cretaceous-Paleogene granitoids in the Inner Zone of Southwest Japan.

Ar age of the volcanic rocks, the sedimentation and the deformation in the Omine Belt, Northern Fossa Magna, central Japan.

K-Ar ages for four volcanic units were measured in the Omine Belt, Northern Fossa Magna, central Japan. Two samples of ash flow tuffs for the measurement were taken from the lower Miasa Formation, one sample of a lava from the middle Taroyama Andesite and one of an ash flow tuff from the upper Omine Formation. The K-Ar ages all resulted around 2 Ma. It means that the Omine Belt which built up more than 3,000m thick fans formed in relatively short time span in a pullapart basin around 2 Ma.

How to Construct and Maintain Broadband Seismic Network in Indonesia.

We constructed a broadband digital seismic network consisting of 23 stations deployed in the western and central parts of Indonesia. In this paper, we show the process of construction, problems encountered during the maintenance of this network, and tips for constructing an overseas broadband seismic network in the future.