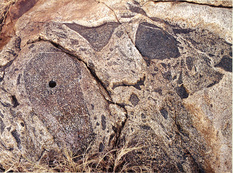 Archaean granitoids of the Johannesburg Dome were evaluated in Terms of the granitoid series using Fe2O3/FeO ratios of bulk chemistry and magnetic susceptibility measurement. The Fe2O3/FeO ratios range between 0.05 and 0.72 and are generally below 0.5, implying that they belong mostly to reduced, ilmenite-series granitoids. Magmatic susceptibility was measured on 122 samples of TTG suite granitoids and 239 samples of calc-alkaline suite granitoids collected on the 700km² granitic inlier constituting the Johannesburg Dome in the central part of the Kaapavaal Craton, South Africa. From the measurements it was established that the TTG suite consists of 78% ilmenite-series and 17% magnetite-series granitic rocks. Magnetic-series granitoids, which are intermediate series in a strict sense, tend to occur sporadically in the central part of the Dome at the interface between the TTG and calc-alkaline granitoids. The granitoids are generally seen to the country rocks into which the granitic rocks intruded.

A new gravity map of the northeastern part of Kyushu has been published. It is an issue of the 1:200,000 gravity map series published by Geological Survey of Japan, AIST (Geological Survey of Japan, National Institute of Advanced Industrial Science and Technology). New gravity date at 445 stations were obtained around Oita City, Shonai Town, Kuju Town and Inukai Town. They were compiled together with existing date of 11,748 land stations. The Bouguer gravity anomaly map with an assumed density of 2.3g/cm3 revealed some structural boundaries. Volcanic areas including active volcanoes, Mt. Tsurumi-dake, Mt. Yubu-dake, Mt. Kuju and Mt, Aso are included in a negative gravity region, which consist of five major gravity lows. Granite rocks and metamorphic rocks are distributed in the positive gravity region at northern part of Oita district. Bouguer gravity anomalies clearly shows that maximum thickness of Cenozoic deposits in the Beppu bay is more than 4,000m.

Samples of the Middle Miocene (about 14.3 Ma) Kumano Acidic Igneous Rocks (KAIRs) collected at eight sites were measured for determining a paleomagnetic direction. Stepwise demagnetization with both alternating-field and thermal methods successfully isolated two remanent magnetization components, high-temperature (high-T) or high-coercivtiy (high-C) component and low-T or low-C one, from natural remanent magnetization in many specimens. The Konogi Rhyolite, a thick pile of rhyolite flows at the lower part of the KAIRs, has an easterly-deflected direction of normal polarity, while welded tuff and granite porphyry at the middle and upper part respectively possess a steeply inclined, southwesterly-deflected direction of reversed polarity. These characteristics of paleomagnetic direction are basically the same as reported previously (Tagami, 1982). The clockwise-deflected direction was considered by the previous study as representing a clockwise rotation of the southwest Japan arc after the emplacement of the KAIRs. The present study, however, interprets that the clockwise-deflected direction is of non-tectonic origin because there are many lines of paleomagnetic evidence suggesting the termination of the clockwise arc rotation by 15 Ma. The clockwise-deflected direction of the KAIRs would have been acquired in an extraordinary geomagnetic field during a polarity transition or excursion. Furthermore, the similarity of the direction of the tuff and granite porphyry to that of the Muro Pyroclastic Flow Deposit, also dated at about 14.3 Ma, implies that these units are genetically associated with each other.

Triassic and Jurassic radiolarians from the Tamba Terrane in the Nishizu district, Fukui, Southwest Japan.

The Tama Terrane exposed in Southwest Japan is composed of basalt,limestone, chert, mudstone and sandstone, and is characterized by a chaotic mixture of these rocks; i.e., slabs of basalt, limestone, chert, mudstone and sandstone are embedded in pelitic mixed rock. few biostratigraphical studies in the Nishizu district, located at a southwestern part of Fukui Prefecture, have previously been appeared and some of them described the occurrence of Permian, Triassic and Jurassic radiolarians. However, age of clastic rocks such as mudstone and siliceous mudstone in this district are still unknown, because these radiolarians were yielded only from cherts. Through the present work, about 430 rock samples of chert, siliceous mudstone were collected to extract radiolarians from the Nishuzu district and its adjacent area, and Triassic and Jurassic radiolarians were detected from 15 samples. As a result, they can give the rocks additional ages as follows; Triassic, Early and Middle Jurassic for cherts, Late Triassic and Jurassic for siliceous mudstones, and Early to Middle Jurassic for mudstones.