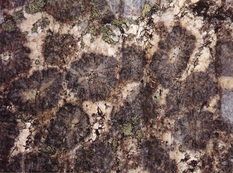 An orbicular granite occurs in the Mt. Sanage of Toyota City, and designated as National Monument since 1931. The granite belongs to the most fractionated phase of the late Cretaceous ilmenite-series biotite granite of the Ryoke Youndder type, and its orbicular textures are caused by variation of the grain size and amounts of K-feldspar, quartz and biotite. Unlike the famed orbicular granite in the Mineyama, Mt. Tsukuba, of similar tectonic setting, no cordierite is observed in this locality.

Late Creataceous to Paleogene rhyolite (11 samples) (Shirakawa 29, Toki 7, Naegi 9, Ryoke 10; total 55 samples), which have high intial Sr rations, were analyzed by XRF and ICP-MS for 11 major elements and 32 trace elements. Granitoids of the Shirakawa area intruding the Nohi Rhyolites in the Hida metamorphic terrane, belong to I-type magnetite series and contain commonly mafic enclaves. They are composed of a high Na2O group of onzodiorite to granodiorite and a low-Na2O group of biotite granites. The former is rich in mafic and calcic components, and was generated in mafic igneous source rocks of the Hida metamorphic terrane. The latter is felsic and leucogranitic, yet its Rb/Sr is not high enough to be a fractionated magma. The leucogranite, typically of the Hirase body, could be a minimum melt generated from an intermediate igneous source. The Shirakawa granitoids are depleted in Y and HREE, implying the existence of garnet and hornblende in the source region.
Late Cretaceous-Palepgene granitoids occurring in the Mino Sedimentary terrane belong to I-type ilmenite-series composed Of high level plutons of the Toki and Naegi areas and intermediate-level plutons of the Ryoke granitoids. These granitoids are reduced and per-aluminous implying genetic connection with sedimentary and less igneous sources. The Toki and Naegi bodies are composed mostly of biotite granite, intruding discordantly, and are rich in lithophile elements. The Naegi granite is especially high in Rb, Y, Th, and U and its Rb/Sr ratio is the highest among the studied rocks. Its REE pattern is flat with high HREE and strong Eu anomaly, which could be considered as fractionated I type. The Ryoke granitoids are mostly biotite granite but horblende-Biotite granodiorite is also common. They are less fractionated and Have own geochemical characters compared with the Toki and Naegi granites. The studies granitoids have chemical compositions reflecting basically their basement characteristics, and also partly their degree of magmatic fractionation.