The 2021 eruption of the Nakadake crater, Aso Volcano

An eruption occurred at Nakadake, Aso Volcano in Kumamoto Prefecture at 11:43 am on October 20, 2021. The eruption generated pyroclastic flows, and volcanic ash fell southeast of the crater.
In order to estimate the scale of the eruption and determine the onset and occurrence of the volcanic activity, the Geological Survey of Japan, AIST conducted a field survey of the distribution of ejecta in cooperation with other research institutes. We also analyzed the constituents of the ejecta.
The results of the survey and analysis of this eruption will be reported to the Volcanic Eruption Prediction Liaison Committee as required, and will be centrally disseminated through this website. The contents described may be revised or changed due to the progress of future research.

Summary of the eruption

Field survey of the tephra distribution

The Geological Survey of Japan, AIST dispatched staff to Aso volcano on October 21 and 22, the day after the eruption, to investigate the distribution of ejecta. The survey was conducted in cooperation with Kumamoto University, National Research Institute for Earth Science and Disaster Prevention, and others. Since it is necessary to conduct a rapid survey in all areas where volcanic ash has fallen, multiple research institutes jointly conduct surveys in accordance with the "ash fall survey data sharing scheme". AIST researchers investigated the accumulation of volcanic ash in the area about 4 km southeast of the crater (Photo 1). Results from the fixed area quantification of the ash fall amount at each point acquired in this way will be used to estimate the total ash fall amount from the eruption. 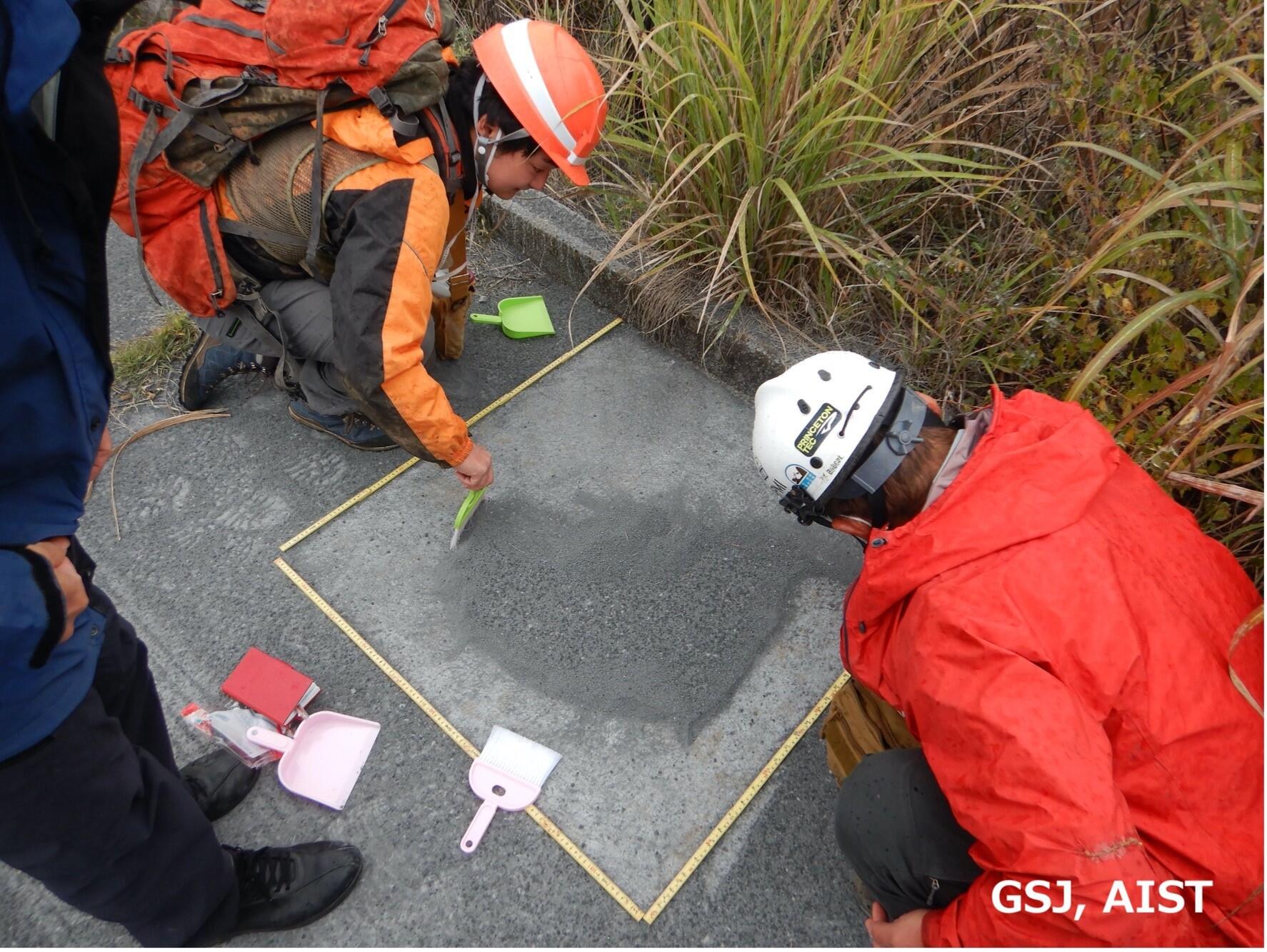 Photo 1 Field survey of the ash-fall deposit at Shikimi area of Takamori Town, ~4.2 km SE of the Aso Nakadake crater. GSJ scientists are collecting volcanic ash from an area of one meter square on the road pavement for quantitative analysis of ash deposit. AM of October 21, 2021. 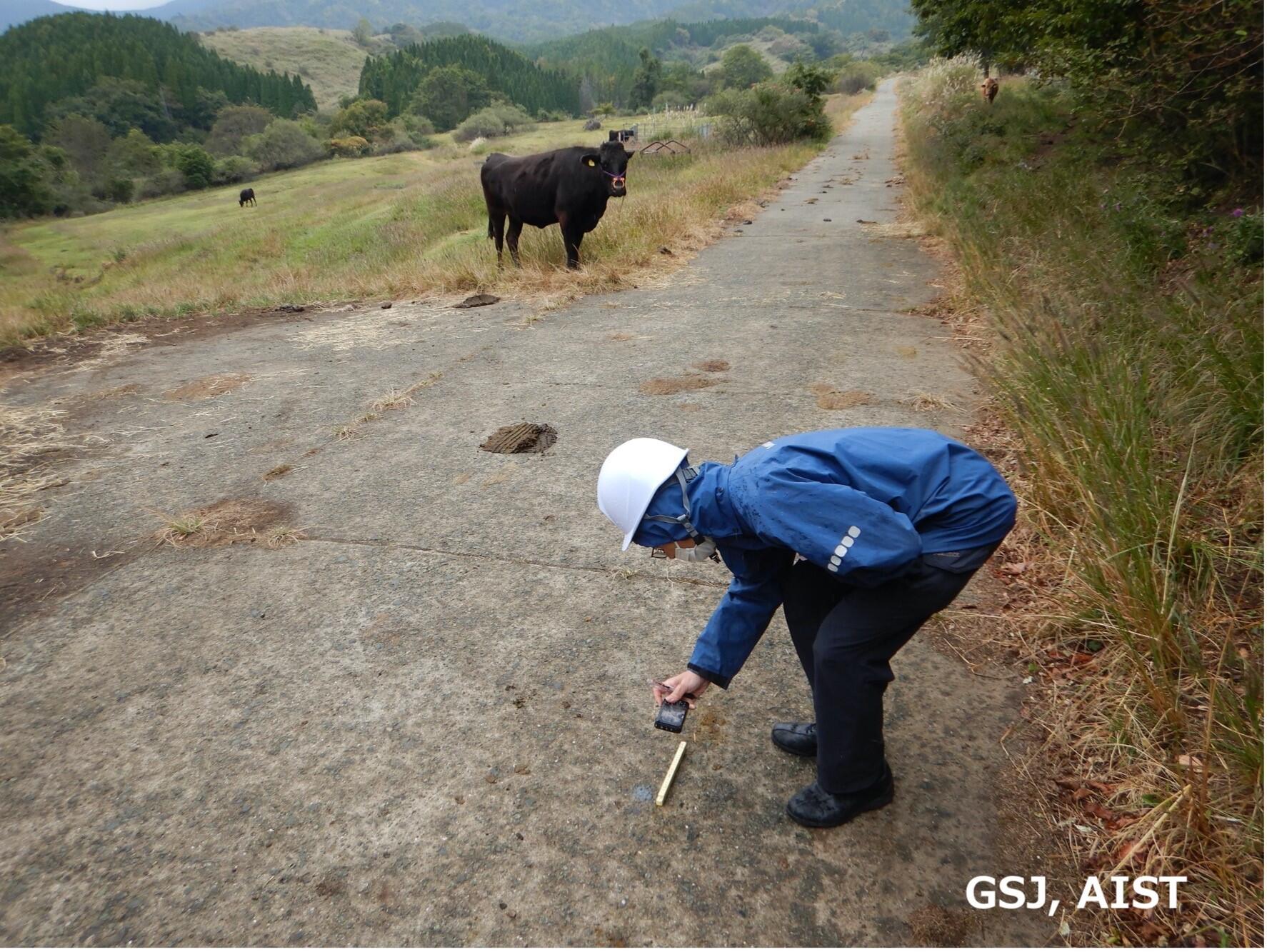 Photo 2 Field survey of the ash-fall deposit at south of Hinoo Pass, Takamori Town, ~4.9 km ESE of the Aso Nakadake crater. A GSJ scientist is observing the spots of volcanic ash on the road pavement. AM of October 21, 2021. 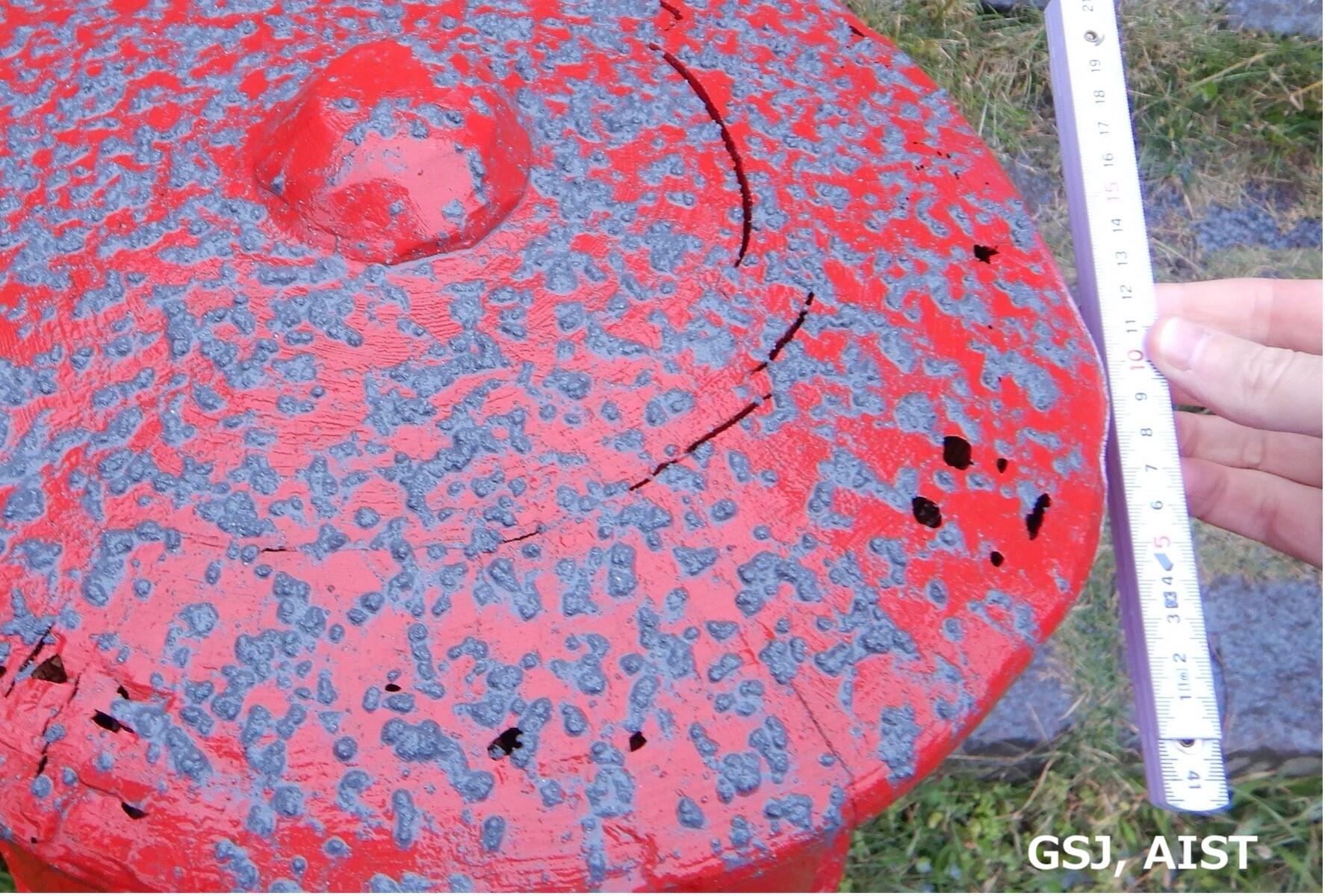 Component analysis of the ejecta

The volcanic ash sample collected during the field survey (Photo 1) was taken back to AIST in Tsukuba City, Ibaraki Prefecture on the afternoon of October 21, the day after the eruption, and the constituent particles of the ash were observed using a microscope. A key characteristic of the volcanic ash is the aggregation of fine particles to form larger particles (Photo 4), suggesting an eruption in a wet environment. This volcanic ash sample was washed with water, dried, and then sifted, and the types of constituent particles and their proportions were analyzed using an optical microscope.
Most of the particles that make up this ejecta consist of gray to white rock fragments (Photo 5). Their characteristics indicate that these particles are fragments of volcanic rock that have been altered by reacting with hot volcanic gas and hot water inside the volcano. Since such rocks comprise the bottom of the crater of Nakadake, it is likely that the rocks and deposits at the bottom of the crater were blown out by the explosion. It contains almost no particles made of volcanic glass formed by rapid cooling of magma that was in a hot and molten state. 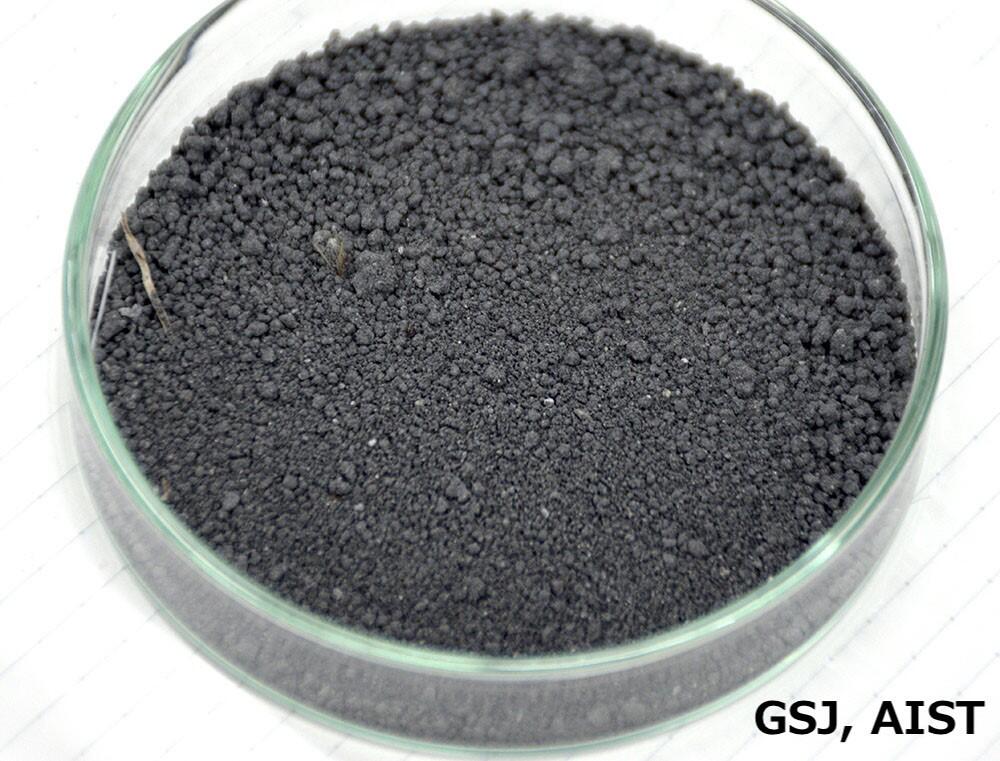 Photo 4 The ash of the October 20 ejecta collected at ~4.2 km SE from the Aso Nakadake crater (before washing). Fine particles are aggregated to form larger particles. 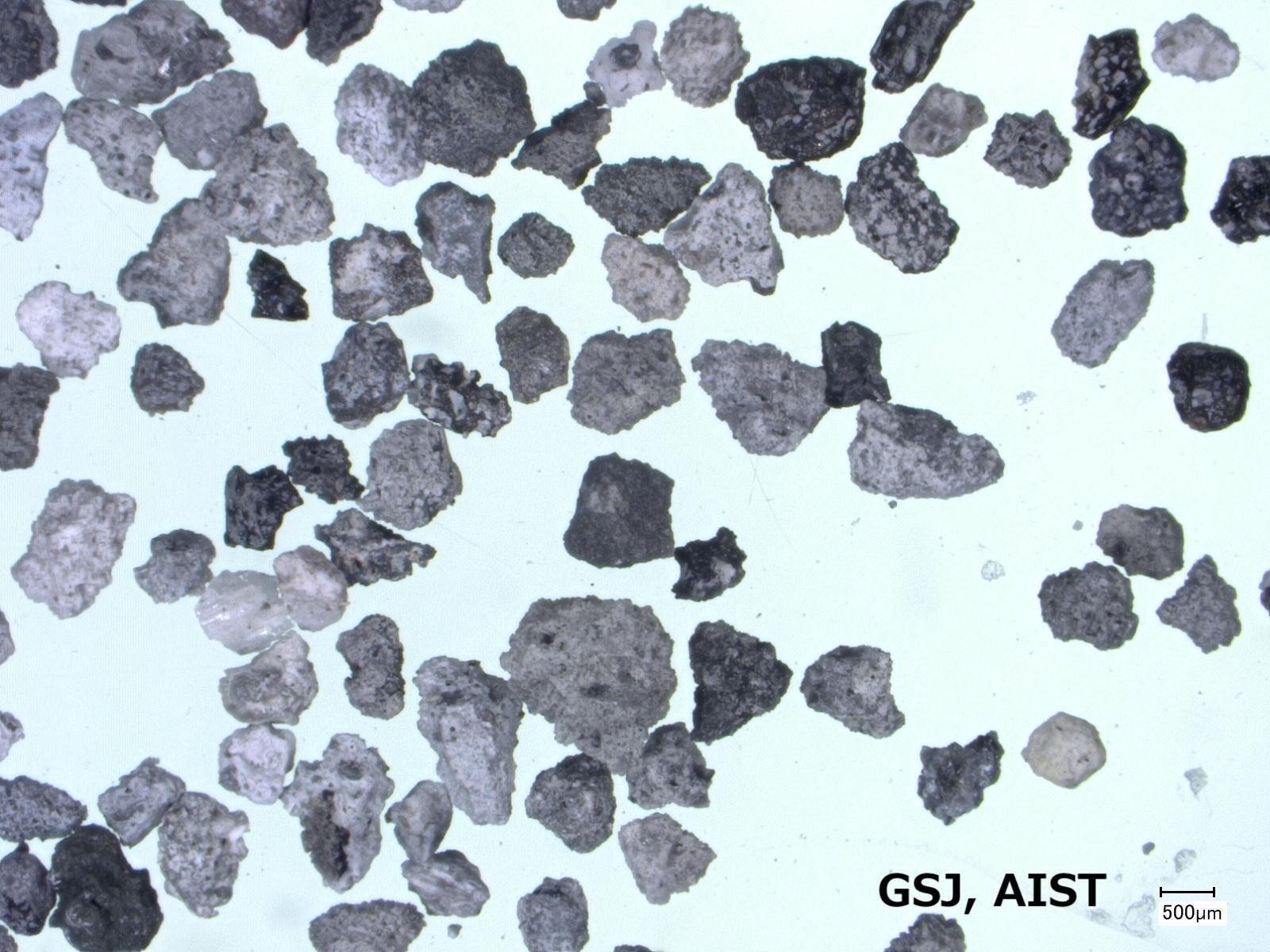 Photo 5 The microphotograph of the ash grains of the October 20 ejecta. Majority of the grains are fragments of hydrothermally-altered volcanic rocks with grayish – whitish color. The volcanic glass fragments with brownish – black color are partially covered by hydrothermal minerals.

Recorded observations following the conclusion of the Heian period (i.e., after AD 1185) indicate frequent and explosive eruptive activity has occurred at the Nakadake crater of Aso volcano over the last ~800 years.  Recently, from the end of November 2014 to the beginning of May 2015, activity included the eruption of hot magma. Then, on September 14, 2015 and October 8, 2016, relatively large-scale explosions produced pyroclastic flows around the crater, and deposited volcanic ash over a wide area. After that, activity was low from 2017 to 2018, but small-scale eruptions have occurred frequently since 2019.

The following information concerning Aso volcano is publicly available from the Geological Survey of Japan (GSJ), an arm of AIST.