Information on the Eruption of the Ontake Volcano

A volcanic eruption occurred on September 27, 2014 at Mount Ontake on the border between Nagano and Gifu Prefectures. According to the Japan Meteorological Agency, the eruption began at about 11:52 JST (=UTC+9h) on September 27. It is estimated that the plume from this eruption reached a maximum height of 7000 m, and a pyroclastic flow cascaded down the mountain in a southwesterly direction for a distance of more than 3 km. The Geological Survey of Japan (GSJ), AIST, dispatched researchers to the site from the day of the eruption and they are currently proceeding with an analysis of the volcanic ash deposited by the eruption. As a result of the analysis, the recent eruption is considered to have been a phreatic eruption. Also, GSJ staff flew on a news media helicopter and observed the situation at the crater including in the vicinity of the mountain’s summit. A portion of the results obtained so far has already been reported to the Coordinating Committee for Prediction of Volcanic Eruptions.

The Ontake Volcano’s History of Activity

Mount Ontake is an active volcano located at the southern end of the Norikura volcanic chain. The present summit area extending approx. 3 km from north to south is composed of multiple craters with the highest point (3067 m) being at Kengamine on the Ichinoike crater rim. The Ontake Volcano’s volcanic activity can be broadly divided into older and younger periods of activity separated by a long period of dormancy. The Older Ontake Volcano was active during the period from about 780,000 to 390,000 years ago, during which time a composite volcano was formed. Then, following a period of inactivity lasting about 300,000 years, volcanic activity restarted about 100,000 years ago, forming the Younger Ontake Volcano. The initial stages of the Younger Ontake Volcano’s activity consisted of a large-scale eruption that ejected a huge volume of rhyolitic tephra, forming a caldera. After that, the composite volcano that constitutes the present summit area was formed.
The large-scale phreatic eruption that took place on October 28, 1979 was Mount Ontake’s first eruption in recorded history; this eruption occurred in the upper part of Jigokudani, to the southwest of Kengamine, and volcanic ash fell in an east-northeast direction. The ash fell as far away as the vicinity of Maebashi in Gunma Prefecture, and the total amount of ash ejected is estimated at over 200,000 tons. After that, very small-scale eruptions occurred from parts of the 1979 crater in 1991 and in 2007.

Field Survey of Volcanic Ash from the Eruption

In order to clarify the sequence of the eruption, GSJ collected volcanic ash from the vicinity of the Kaida Plateau, about 6 km east-northeast of Kengamine summit on September 28, the day following the eruption, and is proceeding with the analysis of this ash. The ash consists of medium-to-fine-grain sand-sized particles with a maximum diameter of 0.5 mm; the greater part of this ash made up of altered rock fragments, with less than 10% unaltered red-orange fragments and crystalline fragments. From these things, the recent eruption is considered to have been a phreatic eruption. Also, at the same time as performing the volcanic ash analysis, GSJ conducted an ash fall distribution survey (Figure 3), which revealed that the main axis of distribution of the volcanic ash from the recent eruption is in the east-northeast direction (Figure 1).

GSJ conducted an aerial observation on the day following the eruption by flying in news media helicopters (Chunichi Shimbun and Yomiuri Shimbun). At 8:00 JST, the height of the volcanic plume was approximately 500 m and white smoke was flowing in a south-southwest direction (Figure 2-A, -B). Moreover, a new line of craters was confirmed about 250–300 m to the southwest of the line of craters formed by the 1979 eruption. The researchers have confirmed that this new crater line was formed in a northwest-southeast direction running roughly parallel to the 1979 crater line and covering a wider area (Figure 1). They have also confirmed the domains of volcanic cinders, volcanic ash and pyroclastic flow from the summit to the mountainside, and are proceeding with their analysis. 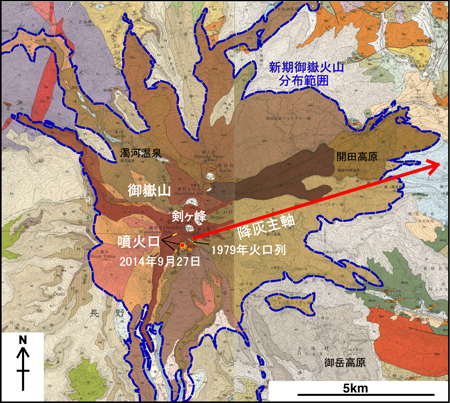 Figure 1. Geological map of the Ontake Volcano (composed of excerpts from the 1:50,000 geological maps “Mount Ontake” (1988; left side) and “Kiso-Fukushima” (1998; right side)).
The position of the craters formed by the eruption on September 27, 2014 (red dot: approximate position) and the main axis of the ash fall based on the on-site volcanic ash survey (red arrow) are shown. In addition, the area of the Younger Ontake Volcano formed from about 100,000 years ago is shown by the blue dotted line. 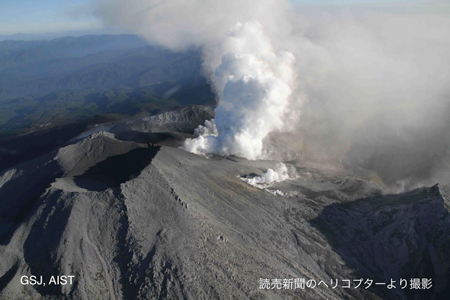 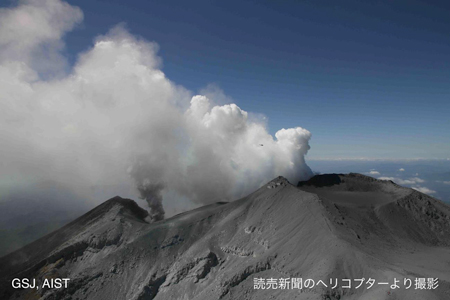 Figure 2-B. Image photographed at 11:12 JST on September 28
This is an aerial view of the eruption from the north. The peak in the foreground is the summit of Kengamine.。 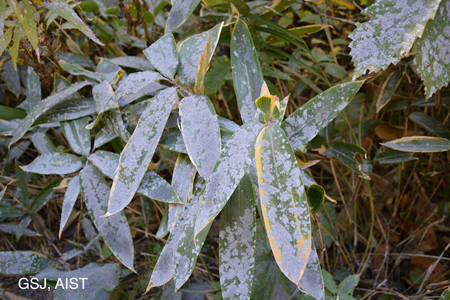 Figure 3. This is the ash fall situation on September 28 around the Kaida Plateau about 6 km east-northeast of the summit of Kengamine.

Materials Submitted to the Coordinating Committee for Prediction of Volcanic Eruptions

The following information concerning Mount Ontake is publicly available from the Geological Survey of Japan (GSJ), an arm of AIST.